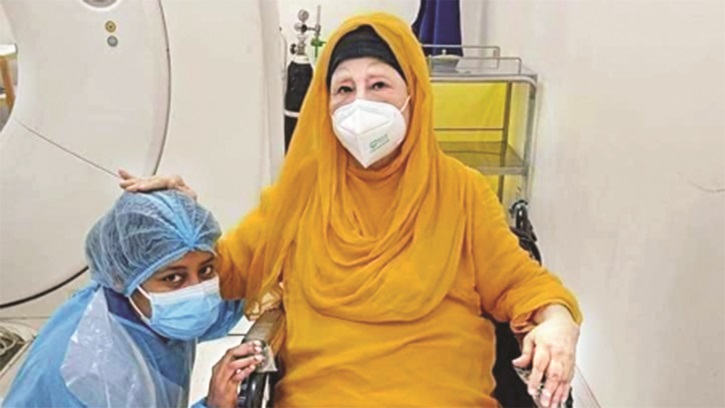 Leaders and activists of Bangladesh Nationalist Party (BNP) are worried about the health condition of the party chairperson Khaleda Zia who is now undergoing treatment at a hospital in the city.

Khaleda Zia’s family and only a few central leaders of the BNP including its secretary general Mirza Fakhrul Islam Alamgir regularly visit her and they know well about her health condition while most of the other senior leaders are staying at self-isolation, sources said.

“Mirza Fakhrul Islam Alamgir can inform better about the health condition of madam (Khaleda Zia) as I don’t know about her diagnosis reports. I usually get information about her health condition from others,” BNP standing committee member Iqbal Hassan Mahmud Tuku told the Daily Sun.

However, a central leader of BNP said they are staying away from the hospital for the sake of proper health care of the party chief and they are just praying for her quick recovery.

Taking to the Daily Sun, BNP vice-chairman Shamsuzzaman Dudu said “Madam’s (Khaleda Zia’s) health condition is not good enough as she is suffering from post-Covid-19 complications. It cannot be said she is out of danger due to her old age.”

BNP insiders said the party leaders and activists across the country are worried about the health condition of Khaleda Zia, especially after her admission into the hospital while the party’s responsible leaders were also not briefing about her condition regularly --- keeping the people including the party men in the dark.

At the same time, many leaders and activists from central to grassroots think that Khaleda Zia was ‘deprived’ of timely and proper medical treatment and they are worried whether her health condition will deteriorate further.

“It seems that the concerned leaders of the party (BNP) have hidden the actual information about the health condition of BNP chairperson as they didn’t give time to time information in this regard,” a central leader of the BNP told the Daily Sun wishing not to be named.

He also said the party men across the country are also worried thinking what will be the future of the party if something bad happens to Khaleda Zia.

“Though Tarique Rahman, elder son of Khaleda Zia who has been staying in London for long, has been running the party from away as its acting chairman, madam’s presence is vital for the party’s unity and strength,” another BNP central leader said.

Talking to reporters, Mirza Fakhrul on Sunday said Khaleda’s condition was better as she had no difficulties in breathing without oxygen support, which was a sign of improvement.

He also said the party was disappointed and angry at the government's rejection of the plea for permitting the party chief to go abroad for better treatment.

The government on Sunday rejected the appeal of the family of Khaleda Zia for permission to take her abroad for better treatment.

Some BNP leaders hoped that though the law ministry rejected the request, the highest authority may finally consider the appeal positively on humanitarian grounds and allow Khaleda Zia to go abroad for better treatment.

On May 5 night, Khaleda Zia’s younger brother Shamim Eskander submitted an application to the home minister, seeking permission to send her abroad for better treatment. After receiving the application, the home ministry forwarded it to the law ministry on the same night for its opinion.

Khaleda Zia tested positive for Covid-19 on 11 April. Eight people at her residence were also found infected with the virus. She underwent the second corona test on April 24 and the report was positive again.

Khaleda Zia was admitted to Evercare Hospital in the capital on 27 April for a brief period for a thorough health checkup, and she continued to remain there as per the doctors' recommendation. Later, she was shifted from the hospital cabin to the Coronary Care Unit (CCU) due to breathing problem.

She tested negative for Covid-19, 27 days after she had been infected with the deadly virus.

Later, the suspension of her jail sentence was extended twice and the government issued separate notifications to this effect. As per conditions of her release, Khaleda Zia will receive treatment at her home and she cannot go abroad during this period.

The BNP chief landed in jail on February 8, 2018, after a special court sentenced her to five years in prison in the Zia Orphanage Trust corruption case. On October 30, 2018, the High Court increased her punishment to 10 years.