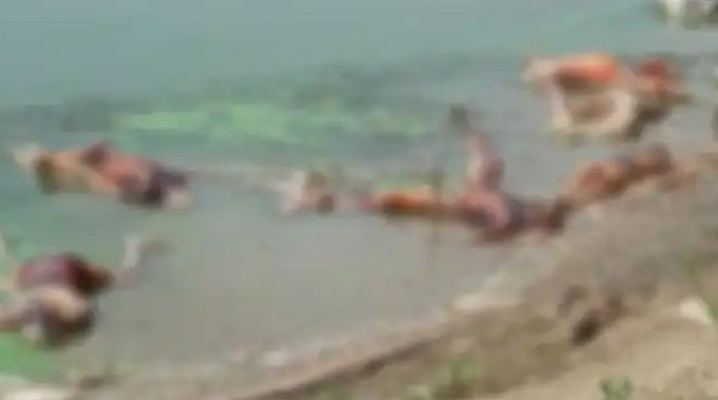 Bloated, decomposing bodies washed up this morning on the banks of Ganga at Bihar's Buxar in frightening new visuals that expose the scale of India's Covid crisis. Dozens of bodies were seen floating in the river at Chausa town - on Bihar's border with Uttar Pradesh -- and later piling up on the banks, to the horror of residents.

People woke up early this morning to the grotesque sight and raised an alarm. The local administration believes the bodies floated down from Uttar Pradesh and belong to Covid patients whose relatives may have been unable to find space to cremate or bury them.

"Some 40-45 bodies were seen floating," said Chausa district official Ashok Kumar, standing at the site of the horror, Mahadeva Ghat in Chausa. He said the bodies seem to have been thrown into the river. By some accounts, there could be closer to 100 bodies.

"They are bloated and have been in the water for at least five to seven days. We are disposing of the bodies. We need to investigate where they are from, which town in UP - Bahraich or Varanasi or Allahabad," said another official, KK Upadhyay.

"The bodies are not from here as we don't have a tradition of disposing of bodies in the river," Mr Upadhyay said.

There is panic in the town and others nearby about infection from the bodies and from the river water. Dogs were seen wading near the bodies, an image that played into fears of an explosion in Covid cases.

"People are terrified of getting Covid. We have to bury the bodies," said Narendra Kumar, a villager.

"A district administration official came and said they would pay ₹ 500 for cleaning up the bodies," he told reporters.

The bodies have led to a blame-game between UP and Bihar.

On Saturday, several partially burnt bodies were seen floating in the Yamuna at Hamirpur town.

The Congress alleges these bodies are proof of the untold hidden Covid deaths.