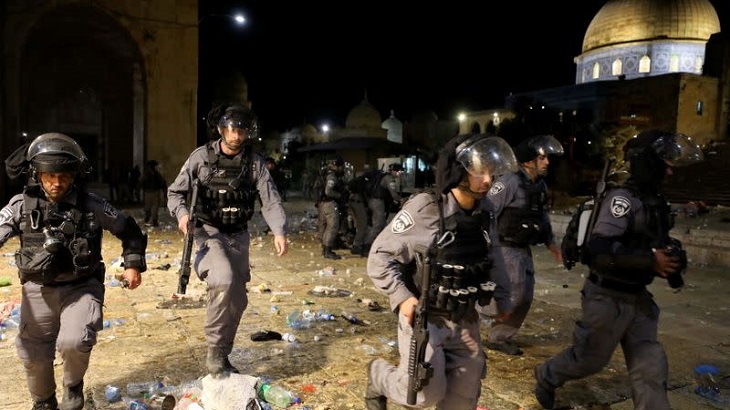 Turkish President Recep Tayyip Erdogan vowed Monday to mobilise the world to stop Israeli "terror", in phone calls placed to Palestinian leaders during a surge in violence in Jerusalem.

More than 300 people were reported wounded in clashes Monday between Palestinians and Israeli police at the flashpoint Al-Aqsa mosque compound.

The clashes are the latest in days of the worst such disturbances since 2017 and came ahead of a planned march to mark Israel's 1967 takeover of the holy city.

The Turkish leader pledged "He will do everything in his power to mobilise the world, starting with the Islamic world, to stop Israel's terror and occupation," his office said.

Erdogan, who has long cast himself as the champion of the Palestinian cause, had on Saturday branded Israel a "cruel terrorist state".

Relations between Israel and Turkey have been strained since a Turkish NGO oversaw a flotilla of ships that tried to break Israel's blockade of the Gaza Strip in 2010.

Hundreds of people demonstrated in support of Palestinians on Sunday evening outside Israel's consulate in Istanbul.

The Turkish police did not intervene despite a ban on large public gatherings during the coronavirus pandemic.

Erdogan's sharp criticism contrasts with months of speculation that Turkey and Israel were looking for ways to normalise ties and re-appoint ambassadors to each other's capitals.

Turkey is seeking to mend fences with its rivals in the Middle East, including Egypt and Saudi Arabia -- a drive that gained momentum after Joe Biden became US president.

In December, Erdogan drew a red line, saying closer relations with Israel were impossible if the Jewish state pursued its current policies in the Palestinian territories.

"That's the point at which we disagree with Israel," Erdogan said at the time.