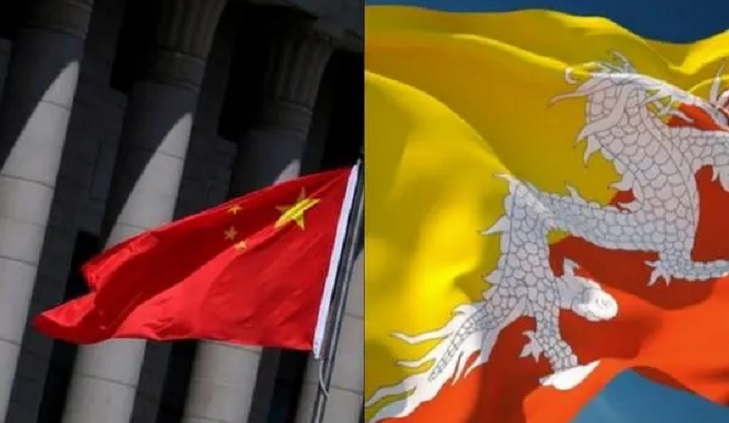 China has been constructing a previously unnoticed network of roads, buildings and military outposts deep in a sacred valley in Bhutan since 2015 and also planting settlers, security personnel and military infrastructure within the territory internationally and historically understood to be Bhutanese.

China had announced in 2015 that a new village, called Gyalaphug in Tibetan or Jieluobu in Chinese, had been established in the south of the Tibet Autonomous Region (TAR). However, Gyalaphug is in Bhutan and Chinese officials have crossed an international border, accRobert Barnett for Foreign Policy.

In a dramatic escalation of China's long-running efforts to outmaneuver India and its neighbours along their Himalayan borders, the new construction is part of a major drive by Chinese President Xi Jinping to fortify the Tibetan borderlands.

Its aim is to force the Bhutanese government to cede territory that China wants elsewhere in Bhutan to give Beijing a military advantage in its struggle with New Delhi. This involves a strategy more provocative than anything China has done on its land borders in the past.

Not only this, this construction openly violates the terms of China's founding treaty with Bhutan, it also ignores decades of protests by the Bhutanese about far smaller infractions elsewhere on the borders, wrote Barnett.

This is very similar to Beijing's provocative tactics in the South China Sea, which is risking the country's relation with its neighbours and jeopardising its reputation worldwide.

China's multilevel construction drive within Bhutan has gone almost completely unnoticed by the outside world, as per Foreign Policy. Bhutan may not have realised the full extent of China's activity on its northern borders or have chosen to remain silent.

In 2017, China's attempt to build a road across the Doklam plateau in southwestern Bhutan, next to the trijunction with India, triggered a 73-day faceoff between hundreds of Chinese and Indian troops and had to be abandoned.

Today all of the Menchuma Valley and most of the Beyul Khenpajong areas in Bhutan are controlled by China. Since the 1980s, China has been outspoken in its claim over Beyul. This comes despite Chin signing a formal agreement with Bhutan in 1998, recognising the latter's sovereignty and its territorial integrity and agreed that "no unilateral action will be taken to change the status quo on the border".

Barnett writes for Foreign Policy that it is hard to fathom China's rationale for its shift from nibbling at a neighbour's territory to swallowing portions of it wholesale, adding that if Bhutan declines to risk ties with India, Beijing's shift will have seriously damaged a previously amicable relationship for very little gain. (ANI)