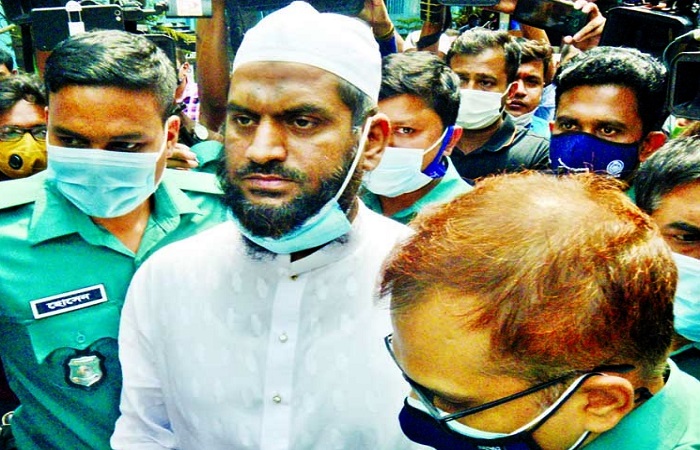 A Dhaka court sent former joint secretary general of Hefajat-e-Islam and general secretary of its Dhaka city unit Mamunul Haque to jail in a case filed with Paltan Police Station over the organization’s mayhem in Baitul Mukarram area in March.

Metropolitan Magistrate Nivana Khair Jesi passed the order as police produced Mamunul before the court after end of his two-day remand in the case (57 (3) 21) and pleaded to keep him behind the bars till the conclusion of the probe in the case.

Dhaka Metropolitan Magistrate Satyabrata Shikder had passed the order as police produced him before the court and pleaded to place him on ten-day remand in case (60 (3) 21) lodged with Paltan Police Station. The court placed Mamunul on three-day remand in the case.

After that police sought another seven-day remand in case (57 (3) 21) filed with Paltan Police Station on the same day over the Baitul Mukarram mayhem. After hearing the plea, the court placed the accused on two-day remand.

Earlier, Dhaka Metropolitan Magistrate Sadbir Yasir Ahsan Chowdhury on April 26 had placed Mamunul on total seven-day remand in two cases lodged over Hefajat’s mayhem in the capital in May, 2013 and March, 2021.

On April 19, Dhaka Metropolitan Magistrate Devdas Chandra Adhikari had placed Mamunul on seven-day remand in a 2020 case lodged with the capital’s Mohammadpur Police Station over carrying out vandalism.