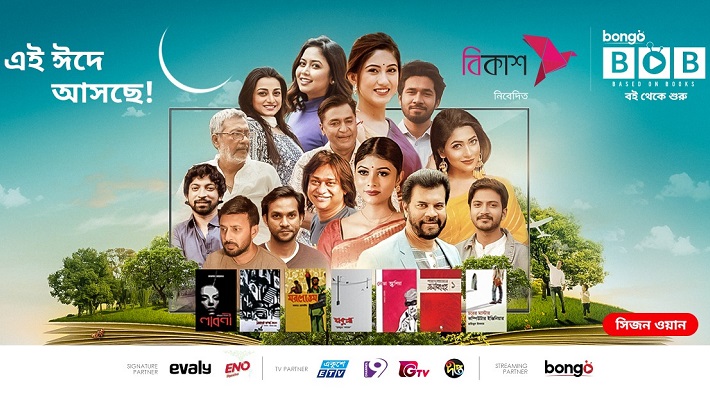 From rom-coms to mystery to action to thriller, the Bongo BoB series is adapted from the seven best sellers of Ekushey Boi Mela 2020, something for all viewers of all genres, including drama, romance, comedy, thriller, action, and supernatural.  For years, inspiration for some of the best movies has come from literary adaptations, such as the Wizard of Oz, Harry Potter, The Godfather, and The Lord of the Rings. This Eid-ul-Fitr, Bongo, the nation’s pioneering video streaming platform, is set to launch a link between works of Bangladeshi literature and film through their 'BoB' or Based on Books project Season One presented by bKash.

Bongo had been focusing on Bongo originals in previous Eids, but production has slowed down significantly due to the COVID-19 pandemic in 2020. This did not dampen the Bongo Content Department’s determination to provide viewers with something different this upcoming Eid.

Zahid Ahmed, Deputy Chief Content Editor of Bongo, narrates how the idea came to life. It was the ‘Brainchild’ of Mushfiqur Rahman, Chief Content Officer of Bongo, and him. The two share a common passion and have been collecting books from Ekushey Boi Mela for several years.  One fine day, the two thought, why not take on this challenge of adapting from literature and do something different? They also thought by doing this, it will also encourage new and contemporary writers to see an alternative way of channeling their stories. Bongo has given priority to contemporary young writers for the first season of Bongo BoB besides prominent fiction writer Shahaduz Zaman. This time seven popular books of 2020 were selected through rigorous discussions with the writers and publishers to be exclusively streamed on www.bongobd.com

Mushfiqur Rahman said, ‘Our stories are reflected in our literature. We have long wanted to get out of the conventional trend and work with literature. This may be the first literary work as a series. It is our stepping stone and we shall continue to build on it. We are glad to have bKash on board who believed in the project.”

He also mentions that works on eminent names of Bangla literature such as Shahidul Zahir, Syed Shamsul Haq, and Selina Hossain in their future projects of films, dramas, telefilms, and web series.  According to Zahid Ahmed, the Bongo BoB Project is a long-term initiative. He said, "Looking through the history, Bangladesh's film industry played a significant role in the country's GDP, but we could not hold on to it, one of the reasons is the lack of original stories. The same can be said about television. Through this venture, we want to present original stories to our audience that hold global standards.”

The History of storytelling is as old as human history. In Bengal, from time to time came the Kathaks, the

Bauls, narrators who read and sang to tell variant stories. The writers used their experiences and imaginations to present the stories using their narrative and vocal skills to allow the listeners to use their imagination to see the characters. They captivated large audiences filled with curiosity for hours.  The stories remind us of the past as well as confront the present. Through the narratives, it allows storytellers to move people across territories, traditions and cultures.

The experiences of the characters in these seven stories give us insight into the lives of people in the real world. We often think the grass is greener on the other side but is it really? In these telefilms, we will see the characters raise their voice in protest, dwell in curiosity or even deceit their own. Take for example the case of Mohammad Ali, where his wife mockingly calls him Alibaba, but through a twist of fate made him rich overnight after he steps on a treasure chest. You may also discover a familiar face of a teacher played by Ilias Kanchan, who holds on to his principles till his last breath to fight injustice at the school he teaches. As the stories unfold, the audience will discover familiar and unfamiliar narratives through the journey of the seven stories.

The seven authors of the books Bongo chose are Shahaduz Zaman, Sadat Hossain, Rahitul Islam, Shibabrata Barman, Mahbub Morshed, Jobaed Ahsan and Maruf Rehman. Zahid Ahmed mentions that the writers have been selected very consciously. Just as there are literary award-winning writers in it, there are also young storytellers whose thoughts reflect the thoughts of the new generation. The demand for the character in the story has also got priority before glamour in the selection of artists.

It isn’t easy for the directors adapting the films either who are faced with various challenges, time, production during COVID-19 and the pressure of adaptation. Writer Maruf Rehman mentioned that with the change in the medium of storytelling, the need for change, expansion and refinement in the script is obvious. His novel Laboni will be adapted in one of the films under the same title.  The seven directors are Animesh Aich, Noor Imran Mithu, Iftekhar Ahmed Fahmi, Sanjoy Somaddar, Wahid Tareq, Vicky Zahed and Golam Haider Kisloo.  A best-selling storybook does not necessarily mean the same story.

It was also quite challenging for the artists as well who had to work with precaution and safety protocols for COVID19. For the first time, actor Ilias Kanchan will be seen on the Bongo OTT platform.  Ishrat Jahan Chaiti, Azmeri Haque Badhon, Partha Barua, Manoj Pramanik, Mumtahina Toya, Ashna Habib Bhabna and many more seniors and contemporary artists will be featured in the films.

The on-screen stories will be broadcasted on Deepto, Ekushey, Gazi and Channel 9 television channels and streamed exclusively on Bongo's OTT platform at www.bongobd.com, or users can download the iOS, TV or Android App.

“Bongo has always been a pioneer in the Video Streaming industry in Bangladesh since 2013. We have been digitizing movies from the 70s, 80s and 90s to preserve our culture. When this show was first pitched to our content committee, it was a no-brainer decision for us. We are extremely excited to take this approach and will continue to build on this along with delivering our technology to enable millions to watch anywhere, anytime and on all screens. We reach over 179 countries globally, over 15 million viewers through all Bongo Channels and this time with the BoB Series we are also launching with English subtitles so that global audiences can also get a taste of Bengali stories,” said Fayaz Taher, Chief Operating Officer of Bongo.

Books and films are two different mediums of storytelling. The Bangla word for cinema was often synonymous with books or Boi. Countless Bengali movies have been made based on literature in the past. It is time to revive our content industry through a collaborative approach of writers, storytellers, directors, artists, television channels and video streaming platforms. Content is Queen at the end of the day!

Bongo is a media-tech company that is empowering the next billion through the creation, distribution and monetization of video content. At Bongo we believe access to content and media to be a right, not a privilege. Ultimately, this is what drives us everyday on our mission to create a digital ecosystem catering to our key demographics in frontier markets such as Bangladesh and around the world. Our driving motivation is to provide this access to both ends of the spectrum. On one side we help content producers such as TV stations, labels, and individual creators create, manage, distribute, and monetize their content where it may have been rather difficult if not impossible otherwise. On the other side we have enabled the data and price sensitive individual to access a wealth of content through tailor made technology anytime anywhere on any device, be it a feature phone or smartphone. https://bongobd.com/

Tagline: A housewife in disguise seeks for the proof of an extra-marital affair by her husband and evokes a sudden terror-threat.

Storyline: A housewife in disguise seeks for the proof of an extra-marital affair by her husband and evokes a sudden terror-threat. An undelivered letter puts a corporate guy in the position to grant a convicted felon sentenced to death his last wish!

Tagline: The story is about a jobless man who becomes rich overnight stumbling upon a treasure chest

Storyline: A comedy thriller about the life of a simple man who stumbles upon a treasure and becomes rich by stealing from a notorious criminal gang

Storyline: A small town teacher sets out to protest a vast injustice at his school in front of the Press Club. When disaster strikes, truth reveals and justice finally prevails.

Based on Book “Laboni“ by Maruf Rehman

Tagline: Mysterious events cloud Tamim when he reads a novel that talks about his life.  He wonders if his fate is already determined?

Storyline: Story of a mystery book. Tamim, a regular boy, was reading the novel and suddenly discovered that everything in his life that was happening, was written in the book. He wonders if his fate is already determined?

Based on Book “Chorer Master Computer Engineer“ by Rahitul Islam

Storyline: A fresh engineer graduate from Tangail decides to leave his girlfriend, career and metropolitan life behind to teach students and farmers in his home village.

Based on Book “Nova Scotia“ by Mahabub Morshed

Tagline: Love is the secret password to every soul!

Storyline: Mr. Anam is a professor of Dhaka University. He lives all by himself in the city, whereas his family stays in Canada. On an evening walk, he gets kidnapped. When he wakes up after the effects of chlorophyl, he finds himself in a guest house. He gets assigned to reveal the password and Prof of an offshore bank locker in Bahamas. Anam’s knowledge and long practice slowly helps him unfold the mystery of a well-known wealthy person, Mr. Khan a Kaekobad.

Storyline: A billionaire's Son Antu didn't have the experience of middle class or lower middle class life. One day he meets a facebook friend whom he couldn't recognize. This person named zahid took him to a different world of local small town people who are struggling to live their life in this cosmopolitan city.