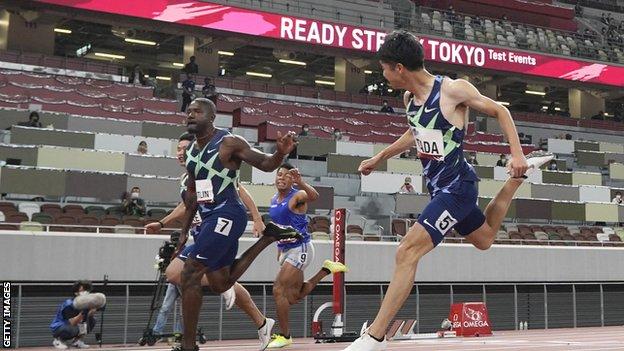 Justin Gatlin was one of 420 athletes to take part in a test event at an empty Olympic stadium as preparations continue for the delayed Tokyo games.

The event was held behind closed doors with Tokyo under a state of emergency due to a rise in coronavirus cases.

A small protest outside the stadium called for the Games to be cancelled.

"I felt beyond safe," said Gatlin, 39, the 2004 Olympic champion and silver medallist at Rio in 2016. "The bubble has been very successful."

American sprinter Gatlin, who was one of nine international athletes involved and won the men's 100m, said daily testing and use of a bubble showed the games could be staged successfully and without adding to Japan's coronavirus infections.

"The only time I've ever seen the outside is when we get on the bus to go to the track. We work out then we go back to the hotel. We don't even eat in a cafeteria or a meeting ground, we take our food to our room and we eat in our room.

"I know a lot of athletes are not going to be happy with this but the measures are in place to keep everyone safe, I think it's working."

Competitors will have daily Covid-19 tests at this summer's Olympics and Paralympics.

How ready are Japan and Team GB?
World Athletics president Sebastian Coe said he understood the widespread health concerns of holding the Games but insisted the heightened protocols would deliver a "safe and secure environment".

Organisers have held more than 11 test events since last month, with no reported coronavirus cases resulting from them.

Four of those - volleyball, diving, marathon and Sunday's athletics - have included athletes from abroad.

There will be no international fans but a decision on whether local fans can attend the Games will be made in June.

The Olympics are due to begin on 23 July, with the Paralympics set to start on 24 August.