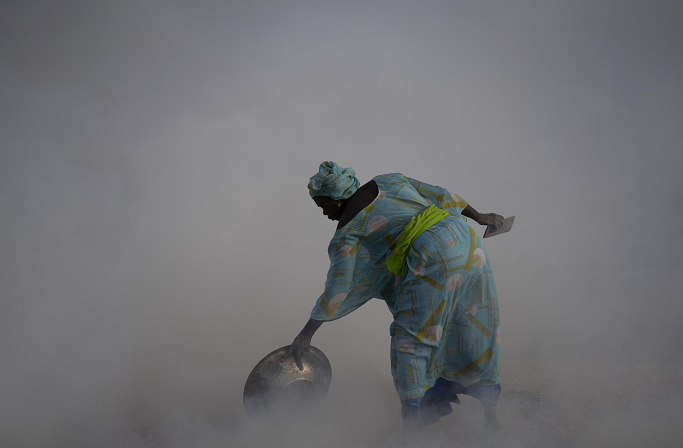 Since her birth on Senegal’s coast, the ocean has always given Ndeye Yacine Dieng life. Her grandfather was a fisherman, and her grandmother and mother processed fish. Like generations of women, she now helps support her family in the small community of Bargny by drying, smoking, salting and fermenting the catch brought home by male villagers. They were baptized by fish, these women say.

But when the pandemic struck, boats that once took as many as 50 men out to sea carried only a few. Many residents were too terrified to leave their houses, let alone fish, for fear of catching the virus. When the local women did manage to get their hands on fish to process, they lacked the usual buyers, as markets shut down and neighboring landlocked countries closed their borders. Without savings, many families went from three meals a day to one or two.

Dieng is among more than a thousand women in Bargny, and many more in the other villages dotting Senegal’s sandy coast, who process fish — the crucial link in a chain that constitutes one of the country’s largest exports and employs hundreds of thousands of its residents.

“It was catastrophic — all of our lives changed,” Dieng said. But, she noted, “Our community is a community of solidarity.”

That spirit sounds throughout Senegal with the motto “Teranga,” a word in the Wolof language for hospitality, community and solidarity. Across the country, people tell each other: “on es ensemble,” a French phrase meaning “we are in this together.”

This story is part of a yearlong series on how the pandemic is impacting women in Africa, most acutely in the least developed countries. AP’s series is funded by the European Journalism Centre’s European Development Journalism Grants program, which is supported by the Bill & Melinda Gates Foundation. AP is responsible for all content.

Last month, the first true fishing season since the pandemic devastated the industry kicked off, bringing renewed hope to the processors, their families and the village. The brightly painted vast wooden fishing boats called pirogues once again are each carrying dozens of men to sea, and people swarm the beach to help the fishermen carry in their loads for purchase.