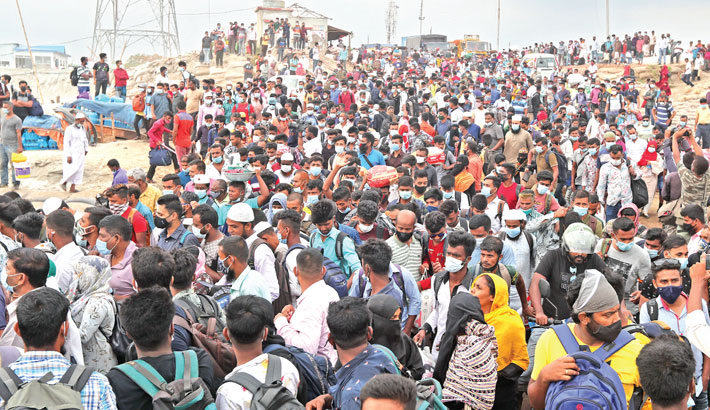 A large number of people are still struggling to leave the capital for their village homes to celebrate Eid-ul-Fitr though the government is trying to keep people in homes amid the surge in coronavirus cases.

The travellers were not following the health guidelines, including maintaining social distancing. Even, many of them were not wearing face masks to protect themselves from the deadly coronavirus.

Despite barricades on roads, suspension of ferry movement on river channels, home-goers, including women and children boarding in various small vehicles, are also thronging towards roads, highways and ferry ghats.

The authorities deployed Border Guard Bangladesh (BGB) at Shimulia-Bangla Bazar and Paturia-Daulatdia ferry ghats on Sunday morning to stop the streams of the home-bound people and vehicles. But, thousands of people hoping to make their way home for Eid are still swelling at both the ferry ghats to cross the river Padma.

Though the BIWTC had operated 15 ferries overnight, it suspended the services in the morning. However, ‘Ferry Faridpur’ did leave Pier 1 around 7:45 am on Sunday with eight ambulances on board.

Daytime ferry services were suspended, said BIWTC Assistant General Manager Md Shafiqul Islam, but some vehicles were allowed to cross due to emergencies and the crowd immediately swarmed onto that ferry.

“Despite the risk of the coronavirus pandemic, people are still rushing to get home. They aren’t following any restrictions.”

People were falling over themselves in order to get on the ‘Ferry Faridpur’ at Pier 1 on Sunday morning. It only took a few minutes for the vessel to be swamped with passengers.

The back of the ferry was so crowded with people that it could not depart. Eventually, police charged the crowd with batons and the small vessel was able to set off for the Kathalbari Port with nearly 1,500 on board.

Some people boarded fishing boats and trawlers to cross the Padma River near the port. River police have been detaining trawlers from the area.

Failing to find a ferry passage, they resorted to breaking the rules by crossing the river in small, engine-operated trawlers, he said.

“These trawlers were carrying anywhere between 100 and 150 passengers,” he said. “We have detained 12 trawler drivers so far.”

Meanwhile, a 20-km tailback was created on Dhaka-Aricha highway on Sunday morning due to the mad rush of homebound people ahead of Eid-ul-Fitr.

While visiting the highway, it was found that a long queue of vehicles was created on the road, stretching from Savar Bus Stand to Gabtoli Bridge area.

People, including women and children, are set to go to their village home to celebrate Eid, ignoring heath safety protocols.

Police said the tailback was created due to heavy pressure of private vehicles alongside the public transport.

Some long-route passengers said they boarded local bus from Savar and their destination was Amin Bazar. Later, they crossed the bridge on foot and boarded another bus from Gabtoli to reach their respective destinations.

Abul Hossain, a resident of Gabtoli, said, “I along with six of my family members started journey around 6:00am. Now it’s 11:30am. We are still at Amin Bazar point.”

However, people are reluctant to maintain health guidelines and social distance though the government has allowed intra-city transport services on condition of maintaining health guidelines.