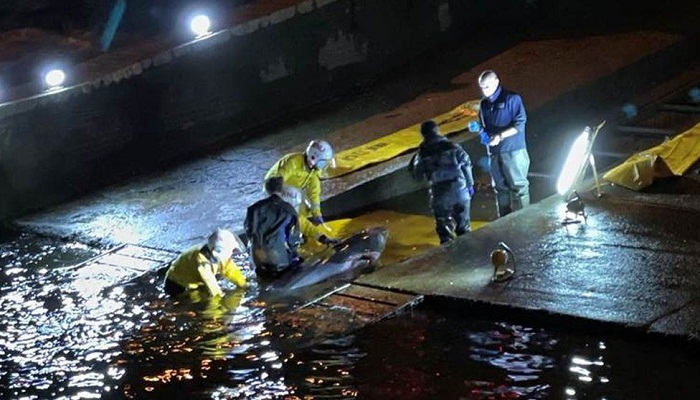 A rescue operation has taken place to help a small whale that became stranded in the River Thames in south-west London.

Crowds gathered at Richmond Lock on Sunday evening after the whale, believed to be a Minke, got stuck.

RNLI rescuers arrived to cheers at about 21:00 BST and moved the whale at about 00:45 BST to a safer location.

A vet will now assess the animal's health to determine if it is healthy enough to be released.

BBC News reporter Matt Graveling, at the scene earlier, said the future of the whale "still hangs in the balance".

The animal was understood to be stuck on the lock's boat rollers.

The Port of London Authority, which owns and operates the lock, said the whale had become stranded at about 19:00.

Gareth Furby, at the scene, tweeted: "The rescuers need to be sure it will survive if taken back upriver. The whale has some injuries."

Earlier, Jake Manketo, 20, from Richmond, said: "Everyone here is just hoping they get it out.

"We couldn't believe our eyes when we first saw the poor fella, not every day something like this happens in Richmond."

It is thought the whale was first spotted earlier in the day a few miles up the river near Barnes Bridge.

Minke whales are the smallest of the great whales, growing to about 10m and can usually be found throughout the northern Atlantic and Pacific Oceans.