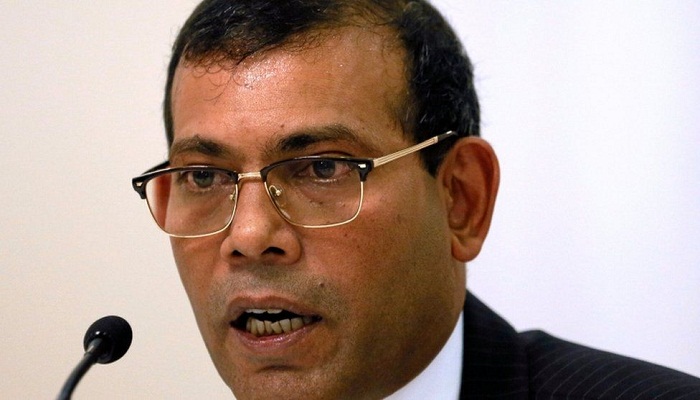 Police in the Maldives say they have arrested the alleged "prime suspect" in the attempted assassination of the country's former president.

Adhuham Ahmed Rasheed, 25, was arrested on Sunday, three days after Mohamed Nasheed, 53, was badly injured in an explosion outside his home in the Indian Ocean nation's capital, Male.

Mr Nasheed's condition had improved on Saturday, according to family.

A British national and two others were also injured in the 6 May bombing.

The official Twitter account of the Maldives Police announced the arrest on Sunday, saying the man is believed to be the prime suspect in the attack.

They allege he is the same man seen on CCTV waiting in an alley just before a device planted on a motorbike parked near Mr Nasheed's car exploded on Thursday evening.

Police say the attack was carried out by "religious extremists," and have also arrested two other men, named as Mujaz Ahmed, 21, and Thahmeen Ahmed, 32. Investigators are still searching for others believed to be involved in the attack.

The Maldives is known for its luxury holiday resorts, but has also faced political unrest and Islamist militant violence.

Mr Nasheed - who was ousted in a coup four years after his 2008 election, but now holds the second most powerful position in parliament - has been an outspoken critic of hardline Islamists.

News agency AFP say the explosives had been packed with ball bearings for maximum damage.

Mr Nasheed, who is also known for his work on tackling climate change, underwent 16 hours of surgery to remove shrapnel from his body. On Saturday his hospital said he was off life support but would remain in the intensive care unit.