West Brom down after defeat at Arsenal 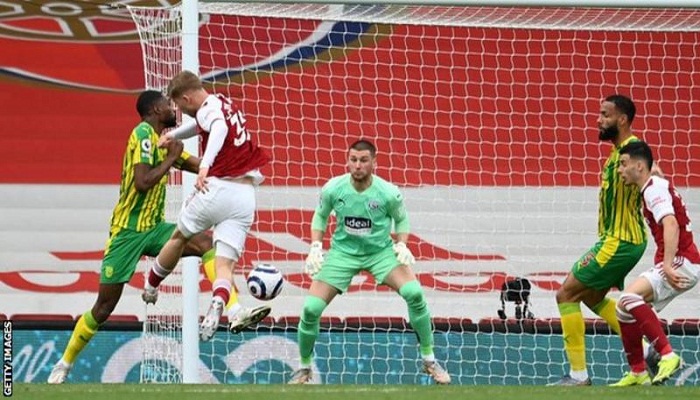 West Bromwich Albion have been relegated from the Premier League for a fifth time after a defeat at Arsenal that keeps alive the Gunners' slim hopes of qualifying for Europe.

Sam Allardyce's side were already virtually down but their return to the Championship is now confirmed, with the Baggies sitting 10 points from safety with three games remaining.

Emile Smith Rowe volleyed a smart opener from Bukayo Saka's cross in the 29th minute after Arsenal had stemmed the visitors' promising start.

Nicolas Pepe made West Brom's task even more difficult six minutes later when he cut in from the right and curled into the top corner to double Arsenal's lead.

Matheus Pereira gave the visitors hope, running from his own half to score a superb individual goal with 23 minutes remaining.

But it was not enough to stop West Brom suffering a joint-record fifth Premier League relegation, with Willian adding a late third for Arsenal from a free-kick.

Victory means the Gunners, who were knocked out of the Europa League on Thursday, do at least still have a mathematical chance of playing European football next term.

The fixture pitted two managers at contrasting ends of their coaching careers against each another but who are enduring similar periods of relative struggle.

For Allardyce, defeat at the Emirates confirms his first relegation from the Premier League as a manager, although the experienced 66-year-old had all but accepted their fate before the match.

The division's great escape artist replaced Slaven Bilic in December when the Baggies were 19th in the table and accepted the task of trying to guide them to survival.

Allardyce has previously kept Blackburn Rovers, Sunderland and Crystal Palace in the English top flight after taking control in similar circumstances, but the rescue mission at the Hawthorns proved too big with West Brom managing just four wins in the 22 league games he has overseen.

They arrived in north London needing to double that tally and win all of their remaining matches, while also hoping that one of Burnley, Southampton and Brighton failed to win any of theirs.

The Baggies started well and Pereira curled narrowly wide from distance before again firing off target from a promising break, but that confidence drained once Arsenal broke the deadlock before the half-hour mark.

It took a magical moment from Pereira to spark them into life once more, with the Brazilian scoring his 10th league goal of the season with a driving run and smart finish, before his countryman Willian's free-kick put the game beyond the visitors.

It means West Brom return to the Championship at the first time of asking and join Norwich City as the only sides to be relegated from the Premier League on five occasions.

Whether Allardyce, and indeed the impressive Pereira, are at the club to lead the promotion bid next season remains to be seen, with the former England boss saying he will discuss his future once he and the club have dealt with the disappointment of going down.

Allardyce had little sympathy for under-pressure Arsenal boss Mikel Arteta before the game and said the Spaniard's time with the Gunners will "determine his career going forwards".

Seventeen months into his managerial career and the 39-year-old's tenure in north London has come under the spotlight after a meek Europa League semi-final exit to Villarreal left the Gunners facing the prospect of no European football next season for the first time in 25 years.

A place in the Europa League does remain an outside possibility with Arsenal sitting ninth, six points behind West Ham United in fifth and five behind Liverpool in sixth.

Either way, Arteta insists big changes must be made to his squad for next season and expects the club's owners to back him in the transfer market.

He may well look to build his future side around two homegrown stars in Saka and Smith Rowe, who have been excellent this season and combined superbly for the latter to score the opening goal.

The influential Saka, 19, has made more assists than any Arsenal player since his debut in November 2018 and got his 19th for the club when he picked out Smith Rowe for the 20-year-old to guide a volley beyond Sam Johnstone.

That was Smith Rowe's first Premier League goal and Arteta said afterwards the playmaker is "making the right steps" but must now continue to score more.

Arteta will also be hoping club-record signing Pepe can produce more moments like the one that doubled the Gunners' lead soon after, while 19-year-old Gabriel Martinelli was trusted to lead the attack with captain Pierre-Emerick Aubameyang left on the bench.

'Relegation painful for club and players'

West Brom manager Sam Allardyce speaking to Match of the Day: "It has been looking difficult for a while and we haven't taken our chance to give ourselves a better opportunity of staying up.

"I think these players should be fighting to stay out of it. They have performed well enough but our capabilities of scoring have deserted us.

"It is a disappointing night but we have to take it on the chin. It is not as painful for me as it is for the club or players. It is painful, I wanted it for the club and players more than me, but it hasn't happened. Everyone has to accept it and recover quickly."

Arsenal boss Mikel Arteta, speaking to Match of the Day: "The best way to do it is with the right attitude. The three goals were very different but really good individual and collective actions.

"We have done so many right steps, some you can see and some you can't. The foundations are there."

Big Sam struggles at the Emirates - the stats

-Arsenal recorded back-to-back Premier League victories for just the second time in 2021, having previously done so in January.

-Of the five relegations West Brom have suffered from the Premier League, only in 2002-03 was their relegation confirmed with more games remaining (four).

-Arsenal are unbeaten in their past 30 Premier League home games against promoted sides (W25 D5), with their last such defeat in November 2010 against Newcastle.

-Sam Allardyce has failed to pick up a point in his 10 Premier League trips to Emirates Stadium, with only Harry Redknapp at Old Trafford (15 visits) managing more matches at a single venue without earning at least one point.

-Emile Smith Rowe is the fourth player aged 21 or under to score for Arsenal in the Premier League this season (along with Saka, Martinelli and Nketiah) - no team have had more.

-Matheus Pereira is the first West Brom player to reach 10 goals in a Premier League campaign since Saido Berahino scored 14 in 2014-15.