Infections on the rise across South Asia 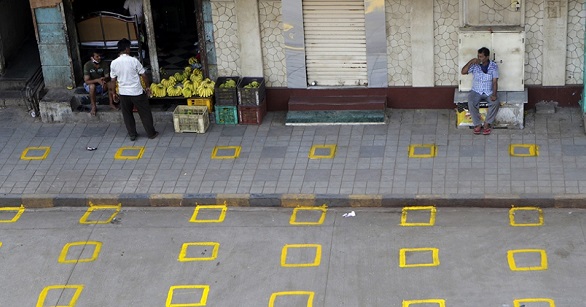 Travel and other restrictions have been introduced amid fears that poorly resourced local health services will be unable to cope.

In India, daily case numbers and deaths began rising in March and then surged dramatically.

There's particular concern about Nepal, which saw sharply rising infections in April. More than 40% of all Covid tests are showing a positive result, according to the Red Cross, citing government data.

It was reported that the country's former king Gyanendra had tested positive after making a visit to India, although it's not clear where he caught the virus.

In March, the Nepalese authorities brought in additional health checks at border crossings, finally closing more than 20 crossing points on 1 May.

Restrictions were imposed in the Kathmandu valley area on 29 April.

Bangladesh saw case numbers rising from early March, and brought in a national lockdown on 5 April. This has now been extended to 16 May.

The land border with India was also closed to passenger traffic for two weeks from 26 April, although some people are still being allowed to cross.

Daily reported cases in Bangladesh have come down significantly since then.

In Pakistan, cases and deaths have also risen sharply, leading to fears about the strain on the health service.

Although there's currently no national lockdown, some provincial authorities imposed restrictions and mandated mask wearing, and the army is helping out in some areas.

Border restrictions have been imposed for travellers from India, and from Afghanistan and Iran.

Sri Lanka has also seen a sudden surge in case numbers since mid-April, leading it to close schools in some areas, restrict religious gatherings and ban travel from India.

Why are case numbers rising?
There are fears that India variants may be partly to blame for growing case numbers in neighbouring countries.

Health experts are looking at whether one of these types of variant might be more transmissible.

But it's also possible that new infections could be linked to variants from elsewhere, such as the UK one.

What do we know about the new variants?
Nepal sent 15 samples collected two months ago to a WHO-certified lab in Hong Kong, which discovered the UK variant in nine of them and the India variant in one.

And in Pakistan, genome sequencing in April found the UK variant was present in a majority of samples. The health authorities in the southern province of Sindh have also identified the presence of the South Africa and Brazil variants.

And the South Africa variant has also been found in Bangladesh.

But it's worth pointing out that genome sequencing in the region is extremely limited, so there isn't enough data to show if these new variants might be driving infections.

Bar chart showing tests per confirmed case in South Asia countries
And in terms of the overall spread of Covid, testing levels have been generally below or only just within the 10-30 tests per new confirmed case recommended by the World Health Organization as adequate.

The limited testing and relatively high positive numbers coming back means the true extent of infection is not being mapped.

Doctors, health experts and others have also pointed out that public adherence to Covid safety measures has slipped over time, with mixed messages coming from political leaders.

In Pakistan, doctors struggling with growing case numbers and limited hospital facilities have even spoken of their relief that the army was being used to help enforce social distancing and other measures.

How are the vaccination drives going?

The slow rate of vaccinations is a major concern.

Countries in the region began rolling out vaccines in January, but they are not yet widespread enough to make a real difference.

Nepal has administered about 7.2 doses per 100 people, Bangladesh 5.4, Sri Lanka 4.8, Pakistan one, and Afghanistan 0.6, according to the latest data.

India donated some vaccines manufactured by the main producer, the Serum Institute of India, as well as Bharat Biotech to its immediate neighbours.

But it then temporarily halted exports to prioritise domestic requirements amid rising cases.

And there have been supply issues with the global Covax vaccine scheme, leading to delays in shipments.

Nepal and Sri Lanka had to stop their vaccination drives at one point until they received donations of the Sinopharm vaccine from China.

Pakistan has also turned to both Chinese and Russian vaccines to try to boost its vaccination programme.