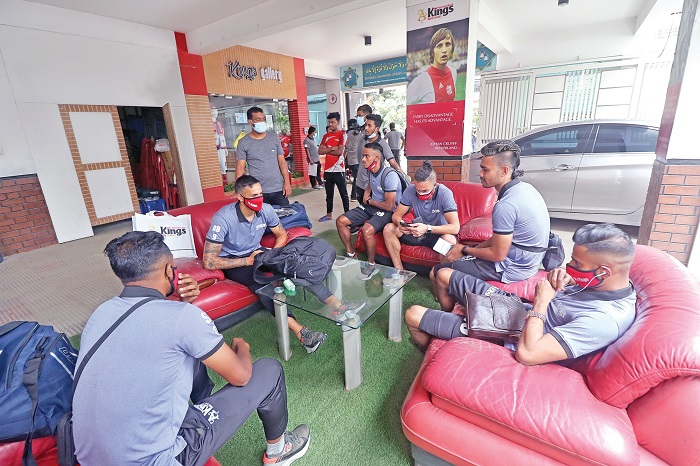 Bashundhara Kings players and officials were ready to leave their club premises with their bags and luggage had already been loaded in the team bus. All of them were waiting for their last photo session before leaving for Maldives to play AFC Cup and earn bigger success for the club. However, all of a sudden they heard about the postponement of their matches which shattered their dreams within a few seconds.

A 40-member team was supposed to leave for Maldives on Sunday evening but they were told to stay back as Maldives expressed its inability to host the tournament in face of rising Covid-19 infections and imposed travel restrictions in the country.

Kings’ President Imrul Hassan said the sudden postponement will make a deep impact on his team as the players and officials will lose their motivation.

“Everything was going as per the plan. We were sure about the tour until this morning then suddenly we were informed about the postponement (AFC Cup). We are really upset. Our all preparations, which had been taking for several months, went in vain,” Imrul expressed his frustration to The Daily Sun on Sunday.

“Our players and officials were highly motivated for this tour. All of us were expecting something good in Maldives. The decision must impact them. They will certainly lose their motivation, tempo. Can they really be able to regain this inspiration and tempo even if AFC gives a new date?” Imrul questioned.

The reigning Bangladesh Premier League champions will also suffer some financial losses that included their flight tickets, campaign costs and other arrangements.

Kings President said they will ask for compensation to the higher governing body of Asian football after getting the official letter next week.

Earlier about the postponement, AFC stated, “The AFC Cup (South) Group D matches, which were scheduled to take place from May 14 to 21, 2021, will not be held in Male, Maldives. Participating clubs who have travelled to Maldives will be required to arrange for their return home while adhering to the COVID-19 health and travel protocols put in place by the country.

“At the same time, the AFC is in contact with all other Participating clubs and officials who have not entered the Maldives to cancel their travel arrangements. The AFC Cup (South) Group Stage matches are now postponed until further notice with more information to be announced in due course,” it added.

AFC is likely to reschedule these matches after the FIFA, AFC joint qualifiers in June. If the matches are held in July, the Bangladeshi side may face some complications because their contracts with most of the foreign recruits including players and coaching staff will come to end in June. The club authority is worried about the contract expiry from now.

“When we first got to know that Maldives will go for the lockdown and curfew from May 6, we talked with AFC and Maldives FA. Both of them have assured us the meet will go on. Today's (Sunday) decision was uncertain. We have nothing to do with this issue, we will wait for AFC's further decision,” he said.

The misfortune is following Kings since their maiden participation in AFC Cup last year. The BPL champions were forced to hold the reins of their chariot due to the pandemic outbreak, despite making a memorable 5-1 goals winning debut against the former Maldivian premier league champions TC Sports Club in the last edition of AFC Cup.

The dream of any Bangladeshi outfit is to play in the AFC Cup final that also gives a chance to enter into the AFC Champions League; the highest tier of club football in Asia; but none have been able to reach there so far. Kings had a great chance to touch that feat this year.

“We were ready to board the plane. The decision came at a time when we would pack the bags and leave for the airport. It is definitely frustrating for us,” he said.

Kings captain Tapu Barman said that the entire team were in shock after getting the news of the postponement.

“We are in shock after getting the news of AFC Cup postponement. We had been preparing for this tour for several months. We had some expectations from this tour. Now we have to resume from the beginning,” he added.

Hosts Maldives, which had been requesting to AFC to postpone the meet for the last few days, finally expressed its inability on Saturday as the local government suspended entry from seven South Asian countries. Indian Super League side Bengaluru FC stuck the final nail in the coffin of the competition breaching the COVID-19 protocol which was exposed by the local media.

After the incidents, Minister of Youth, Sports and Community Empowerment of Maldives Ahmed Mahloof immediately wrote on his social media page, “Unacceptable behaviour from Bengaluru FC breaching the strict guidelines from HPA & AFC. The club should leave Maldives immediately as we can't entertain this act. We honoured the commitment we gave a few months back even with the surge in cases & pressure from the public.”

“We have informed FAM that we cannot hold the match, and asked them to make arrangements for Bengaluru FC's departure. We will be in further correspondence with AFC through Maldives FA to postpone the group stage," he further added.