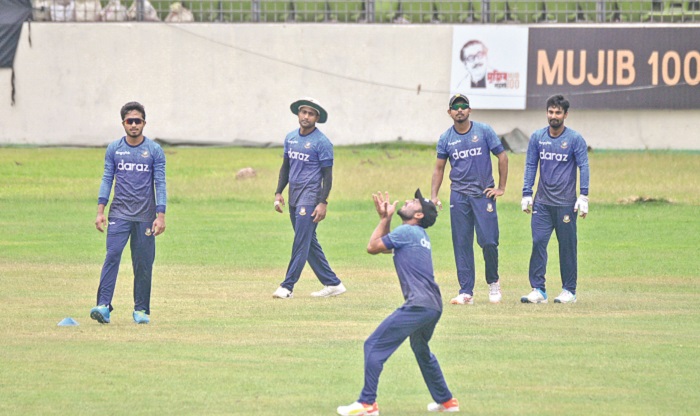 Bangladesh shifted their focus on fielding as several cricketers from the just concluded Sri Lanka Test series joined the national preparation camp on Sunday ahead of the three-match ODI series against the same opponent, scheduled from May 23.

Bangladesh team will conclude the first part of their practice today and they will resume their training on May 16 after Eid vacation.

The major emphasis was put on their fielding and precisely in high catching as that was something that had been hurting them in the recent past considering their failure to grab their opportunities made them suffer.

Bangladesh dropped as many as 10 catches during their white-ball series in New Zealand comprising three ODIs and three T20Is and followed the same path in the two-match Test series against Sri Lanka where they missed catches at crucial junctures.

“I think they are well aware regarding the importance of fielding as it leaves a big impact. If you are a bowler, you can bowl for 10 overs but you must be able to field for 40 overs. The management doesn’t expect that you will only score runs but certainly they expect the batsman and the bowler will hold the catches and field well too. This is not just for bowlers but for everyone,” Bangladesh team leader Khaled Mahmud told reporters after the practice session on Sunday.

“Fielding can be improved by regular practice while how you approach and apply is also very vital and so I feel the mental aspect plays a big role behind it. We have spoken with the boys in Sri Lanka and today as well regarding their fielding,” he added.

BCB earlier insisted that cricketers from the Sri Lanka squad can join the practice provided they have received corona negative result and on Sunday Taskin Ahmed, Mushfiqur Rahim, Taijul Islam, Mehidy Hasan, Mohammad Mithun and Liton Das, who were part of the Sri Lanka Test squad, joined the practice session that started on May 2.

Head coach Russell Domingo along with few other members of the foreign coaching staff also joined the practice on the same day.

Bangladesh also received a blow on Sunday as their pace bowler Hasan Mahmud was ruled out of the upcoming series after suffering a back pain injury.