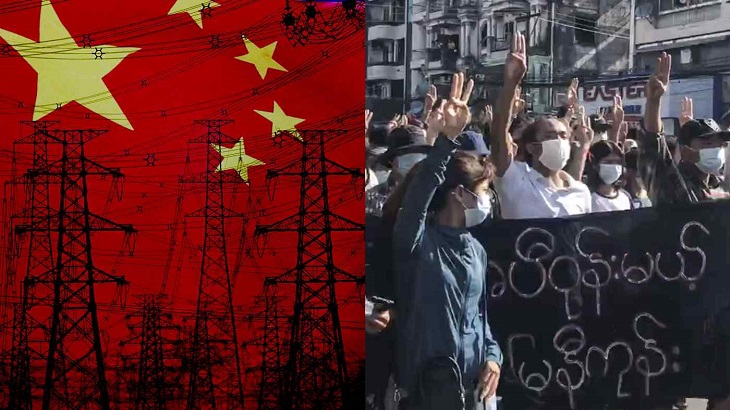 As violent protest continues to mount in Myanmar causing disruption throughout the country, Chinese energy companies contracted to build power plants in the nation are considering exiting the market.

According to several reports, since the military staged a coup in February, China seems to be very concerned over the unfolding chaos in Myanmar, The Irrawaddy reported.

A total of USD 16-million per-day border trade takes place between China and Myanmar. Besides this, Beijing's investments in the 800-kilometer-long oil and natural gas twin pipelines are of strategic importance.

The strategic pipeline carries 12 billion cubic meters of gas, while the crude oil pipeline transports 22 million tons annually. "Power Projects taken up by Chinese state-backed liquefied natural gas and solar energy companies would have been difficult to implement even before the Feb. 1 military takeover, insiders say. Now the coup has further complicated matters," Nikkei Asia said in its report.

Calling the pipelines a crucial part of the Belt and Road Initiative (BRI), in February, Chinese officials have asked Myanmar officials to tighten security measures at the pipelines. "Any damage to the pipelines would cause huge losses for both countries."

This important Chinese project recently came into the spotlight following Wednesday's attack on a group of security personnel who were standing guard at the pipelines' station in Mandalay. Reportedly, three guards at the "oil and natural gas station" were killed by unidentified attackers.

China accused protesters of setting the factories alight. However, protesters denied the accusation saying the attacks were a plot to justify military crackdowns.

According to Swedish journalist Bertil Lintner, many people in Myanmar are rightly upset with the Chinese authorities, given their efforts over many decades to block any move by the UNSC to condemn atrocities committed by military governments in Myanmar or to introduce arms embargos against them.

Lintner further said that it would come as no surprise if attacks were carried out against, for instance, the pipelines. "And attitudes will not change unless the Chinese government stops its support for the Myanmar military. That should be a real concern." (ANI)