Will build planned cities in all districts: PM Hasina 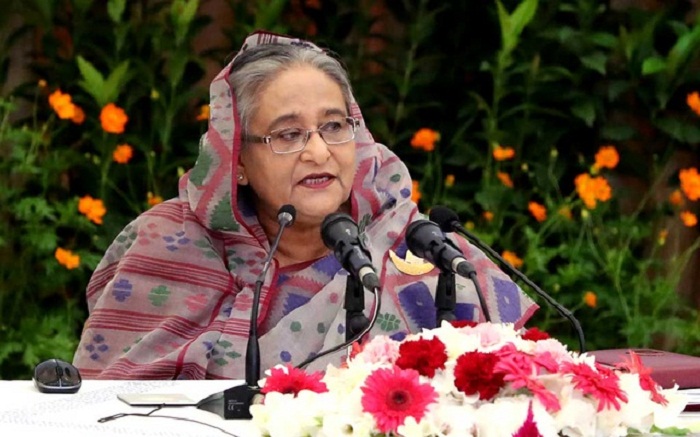 Prime Minister Sheikh Hasina on Sunday said the government will build planned cities in all districts of the country, not only in Dhaka.

"We’ll make planned housing in every division and district…it’ll no longer be Dhaka-centric one so that people have a better life [everywhere]," Sheikh Hasina said.

The Prime Minister said this while addressing a function marking the handover of plot documents to 1,440 original residents and affected people of Purbachal New Town Project.

She said the government is also taking steps so that people in rural areas can avail themselves of civic amenities that the city dwellers are enjoying.

"Everyone has a desire to live in a city. So, we’ve decided that the people living in villages will be provided with facilities like that of a city," she said.

The government is constructing roads, bridges and appropriate infrastructures across the country, Hasina said, adding that a project, 'Palli Janopod', has been taken so that one can buy a flat if he/she wants to live in a flat.

The Prime Minister said the government is taking various steps so that people can manage their livelihood living in flats.

The Prime Minister reiterated her firm commitment that no one in the country will remain homeless. "We’ll arrange a shelter for everybody whatever and however we could.”

Hasina went on saying, “Bangladesh is now a developing nation, and this country will advance further. We’ll be the wonder of the world."

Talking about the new variant of coronavirus that spread widely in neighbouring India, she said all have to remain alert and must wear masks.

"As the neighbouring country is hit hard by the new variant. There’s a possibility for it to enter Bangladesh," she said.

She criticised a section of people for their desperate bid to go to their village homes defying all the restrictions at this critical time of pandemic.

"All are travelling together in ferries and other vehicles. You don’t know who’s infected with coronavirus. You’re carrying that virus to your family members. You’re going to infect them, too. You’re going to put their lives in danger as well," she said.

Hasina questioned what problem they will face if one Eid is celebrated without all other family members and relatives. It will help save all from coronavirus infections, she said.

Textiles and Jute Minister Golam Dastagir Gazi was present at the dais.

State Minister Housing and Public Works Ministry Sharif Ahmed handed over the allotment papers on behalf of the Prime Minister.