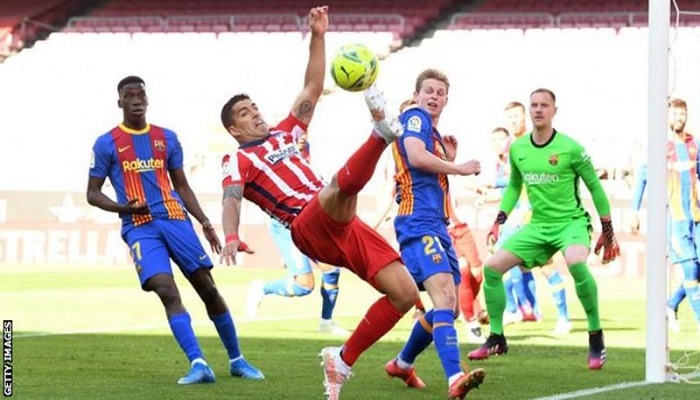 Atletico Madrid remain two points clear at the top of La Liga but their draw at Barcelona means rivals Real Madrid now hold the advantage in the title race.

Real will move level on points with Atletico if they beat fourth-placed Sevilla on Sunday, but would go top because of their head-to-head record.

The top four can all still win La Liga in a remarkably tight title race.

Barcelona struggled to break their visitors down and sit two points behind Atletico with three games remaining.

Lionel Messi looked most likely to make something happen for the hosts and forced Jan Oblak into a diving save after a gliding run across the top of the box.

But the visitors created the better chances in the first half and Luis Suarez saw his strike well saved by Marc-Andre ter Stegen at the near post.

Barcelona trailed Atletico Madrid by 13 points in January and boss Ronald Koeman said he never imagined they would have closed the gap to just two before this meeting at the Nou Camp.

That difference remains the same following an edgy goalless draw, but both sides will feel the title race is far from over.

Suarez, returning to face his former side, embraced with old friend and ex-team-mate Messi before kick-off but posed a threat to Barcelona as soon as the whistle went.

The 34-year-old Uruguay international forced Ter Stegen into a smart stop and the goalkeeper then had to react quickly to palm the ball away from the lurking forward after keeping out Yannick Carrasco's shot.

Oblak tipped wide from Messi who had Barcelona's best effort of the first half at the other end, but the Argentine really came to life with half an hour remaining and so did the hosts.

Gerard Pique's header from Messi's cross was saved by Oblak, before Ousmane Dembele headed off target late on and Messi curled a free-kick narrowly over the crossbar.

"We are still alive in the chase for the title," said Pique. "We competed well and had more chances than them.

"It wasn't to be but we know the situation we are in. I think this is a title race that is still very much wide open."

The draw means Real Madrid are three points back and Sevilla seven off the lead, before their meeting on Sunday (20:00 BST).