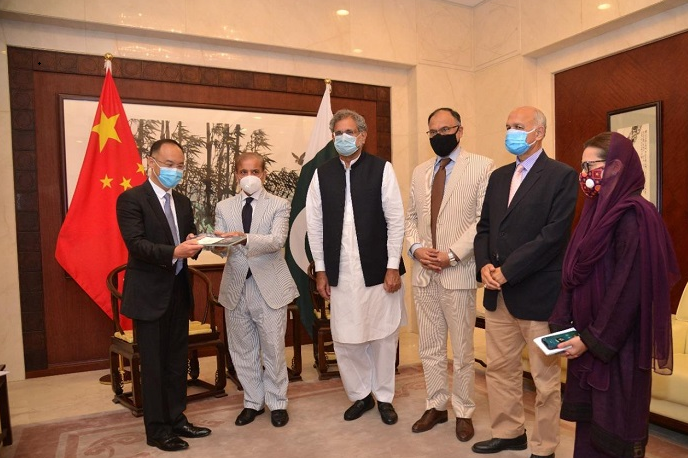 Pakistan Muslim League-Nawaz (PML-N) president and opposition leader in the National Assembly Shehbaz Sharif on Thursday separately called on Chinese Ambassador Nong Rong and British High Commissioner in Pakistan Dr Christian Turner during his first visit to the capital after his release from the jail last month.

This was also Shehbaz’s first meeting with the Chinese ambassador after his appointment which was held in a pleasant, lively and friendly environment.

Mr Sharif said China was like second home to Pakistanis and vice versa. He expressed the hope that the relationship between iron brothers would strengthen and deepen in the coming days.

Calling China an exemplary partner and friend of Pakistan, he said during Nawaz Sharif’s term in the government, this friendship transformed into a lasting and strong economic partnership. He thanked China and its people for their exemplary help to the country during the pandemic.

From sending masks, medics and gear to donating vaccines, the role of China should be recorded in golden words in the history, he said. The PML-N president said the China-Pakistan Economic Corridor (CPEC) was not just an instrument of prosperity for Pakistan but for the entire region. He paid rich tributes to the resolve of Chinese President Xi Jinping and the commitment of former prime minister Nawaz Sharif that could transform the future of not just the people of the two countries but of the region.

He was of the view that it was Nawaz Sharif who made it possible only within three years that majority of CPEC projects were either completed or were nearing completion.

He also expressed gratitude that the Chinese diplomats were safe in the Quetta blast. He said the attack was a conspiracy to derail the ties between two countries. He said protection of all the Chinese people in Pakistan was the responsibility of the Pakistan government. He said setting up of special development zones was the solution to all problems for which they needed to work day and night.

The Chinese ambassador accorded a warm welcome to the PML-N delegation. He said he already knew Shehbaz Sharif because of his “Punjab Speed fame” in China. He said Shehbaz’s hardwork as Punjab chief minister was very impressive and praiseworthy.

Mr Rong said the two countries could benefit from Shehbaz Sharif’s idea, methods and performance in future. He said Nawaz Sharif was an old friend of China and Beijing did not forget its friends. He expressed good wishes for Nawaz Sharif.

The Chinese envoy endorsed Shehbaz’s perspective that nations could not progress without industrialisation and industrial production.

Referring to his visit to Sahiwal power project, he said this project was considered the most speedily built project not just in Pakistan but all over the world which was inaugurated In May 2017, six months before it s scheduled time.

The envoy invited Mr Sharif to China to attend the 100 years of Chinese Communist Party in July.

Mr Sharif also called on British High Commissioner Dr Christian Turner and appreciated the British assistance to Pakistan during the pandemic. He extended his condolences to the British high commissioner for the Covid deaths in Britain.

He said Britain and Pakistan had a long history of bilateral relations and boosting cooperation between the two countries was in their mutual interest.