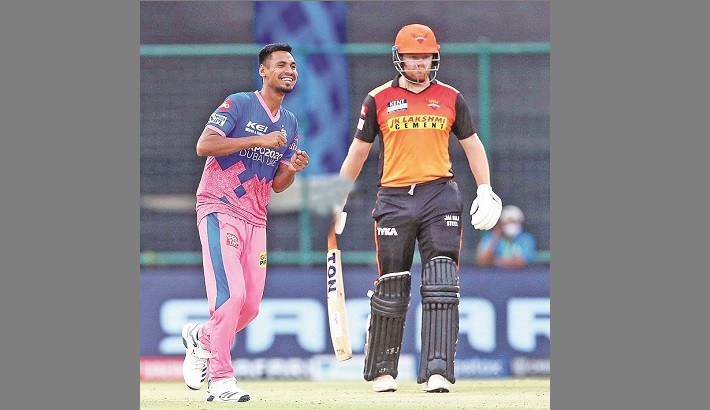 Bangladesh pacer Mustafizur Rahman had a decent outing in the recent Indian Premier League where he picked up eight wickets in seven games for Rajasthan Royals. After a long time, Mustafizur looked to be back in his old form during the competition as he produced some of his old tricks as well as adding a few new variations to his bowling that proved handy for him during IPL. Mustafizur, who returned home on Thursday, is currently doing his quarantine in Pan Pacific Sonargaon Dhaka Hotel with his wife and he talked to The Daily Sun on his view of his performance in IPL, his cricket life in the pandemic situation, Bangladesh’s upcoming ODI series against Sri Lanka, etc.

The Daily Sun: How would you describe your performance in the IPL?

Mustafizur Rahman: I had tried my best and I wouldn’t consider my performance as bad. I would rather say that I had performed nicely. I have a little regret as the tournament had ended prematurely as it would have helped me more if I had played more matches but considering the current situation, I’d say I’m quite satisfied with how it went.

The Daily Sun: It seems as if you are very delighted with your performance in the IPL matches. Do you think you are more confident than before?

Mustafizur Rahman: I was going with a fantastic rhythm and I was being able to do everything I wanted, so yes, I am quite delighted. I’m more confident than before but it’s quite difficult to adjust after a 10-12 days gap, after spending a good time on the field so I’m a little worried about that.

The Daily Sun: Was it satisfying that Rajasthan Royals have used you regularly as the new-ball bowler?

Mustafizur Rahman: I would like to thank Rajasthan Royals for giving me the opportunity as they had me bowled mostly with the new ball and I’ve tried my best to utilise the opportunity. I had been working with the new-ball swing for quite some time and it was going nicely in the IPL matches. I wouldn’t say it was perfect as I need to work harder with this.

The Daily Sun: You had added quite a few variations in your repertoire? Can you describe?

Mustafizur Rahman: I’m trying the slower one from the back of the hand for a long time and it will take more time to master it. I was doing it in nets so tried in the middle one day. The slow yorker is a very difficult ball. In T20, you have to take this kind of risk and I just tried and it clicked. I am working on it for a long time (yorker in death overs) but couldn’t do it but after coming to IPL from New Zealand it seemed I’m able to bowl that. It’s not that I’m bowling in the right spot all the time but coming close to it and I am happy with that but need to work on it more.

I’m also trying to bring one or two balls into the right-hander and working on it too. It comes with experience as you will be able to think about more as you play more matches and your efficiency will also grow while playing with big names in cricket. It would also increase your courage to play in the big tournaments. We usually only play in BPL (Bangladesh Premier League) in which the Indian batsmen don’t take part but currently the Indian batsmen are the best in the world and bowling against them makes you realise where you are with your strength and skills and how to develop yourself.

The Daily Sun: What about your slower and cutters?

Mustafizur Rahman: In cricket, you need to have a lot of variations apart from bowling in the right length and with good pace and so I’m learning all these tricks. But I think a bowler needs one or two variations and I’m working on it more than anything else. I’m not saying that I’m not keen to learn new skills, definitely I will learn those things but for me what is more important is to hone my skill sets (cutters and slowers) as it has made me Fizz. I am working to develop my old skills in a better way so that they can bring me success in future because I’ve been able to deceive the batsmen with it and even now it is proving dividends after all these years.

The Daily Sun: It seems like you had spent most of this year in quarantine. How’s your experience?

Mustafizur Rahman: Nothing to do as I had to be in quarantine in India and I’m also in quarantine in here; but we hadn’t spent the travelling period like the rest of the passengers, as we had to spend in room quarantine as soon as someone got infected by coronavirus. We had to be inside the room for at least five-six days and then we had travelled back on a rented flight and I’m still in quarantine.

The Daily Sun: Is the prolonged quarantine period affecting your game?

Mustafizur Rahman: It sometimes feels boring to be on the field and in the room simultaneously and it is getting tougher day by day as the rules are quite the same for IPL (Indian Premier League) and also in the international level. It’s quite difficult, not only for me but also for all the cricketers.

The Daily Sun: Is the quarantine procedure going to affect your preparation for the Sri Lanka series?

Mustafizur Rahman: It’s quite possible as I was in quite a rhythm in the IPL and now I have to rest for quite some time. It’s not quite the same to prepare you from the hotel room and from the field but still as the games are going to be held on our home turf, I’m quite positive to do well.

The Daily Sun: Are you satisfied with your preparations for the World T20?

Mustafizur Rahman: I had tried my best with the things that should benefit me and I’ve also learnt new stuff and I’d share those with my teammates about how to perform nicely in the wickets and the conditions I’ve played in.