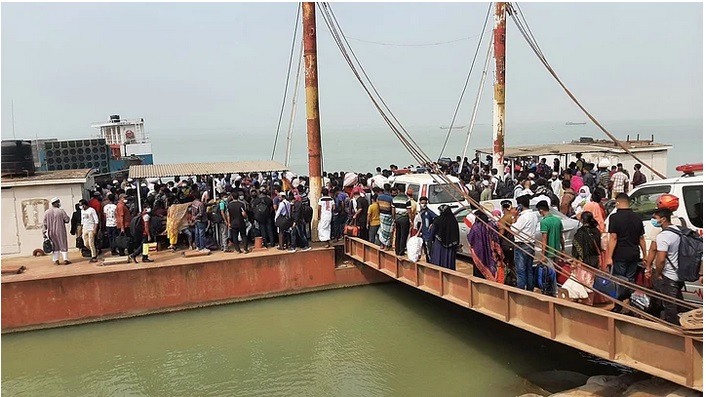 Thousands of people including women and children reached ghats at Paturia and Mawa inviting sufferings as ferry and launch mostly remain suspended.

TV reports and other sources say BIWTC authorities are trying to strictly follow the government order by not operating ferry and launch.

The homebound people left Dhaka anticipating that they would be able to somehow board launch or ferry despite the government restriction.

In exceptions, some ferries and launches carrying buses and passengers at Mawa point are reported to have crossed Padma river Saturday morning.

Hundreds of ambulances mostly bearing patients are in queue in Ghat waiting to board the ferry.

Many people have hired ambulances to make uninterrupted journey and take advantage while unscrupulous ambulance owners and drivers are carrying Eid passengers to earn money.

Flouting ban, buses carrying homebound people are moving along Tangail-Sirajganj highway. This route is facilitating journey of passengers of northern region and that of many southern districts.

In a midnight circular, the government authorities concerned have slapped ban on operation of ferry during daytime. Ferries are allowed to make movement at night for carrying goods-laden trucks and vehicles, not passenger buses.

To stem surge in Covid-19, the government came up with restriction to discourage Eid journey.