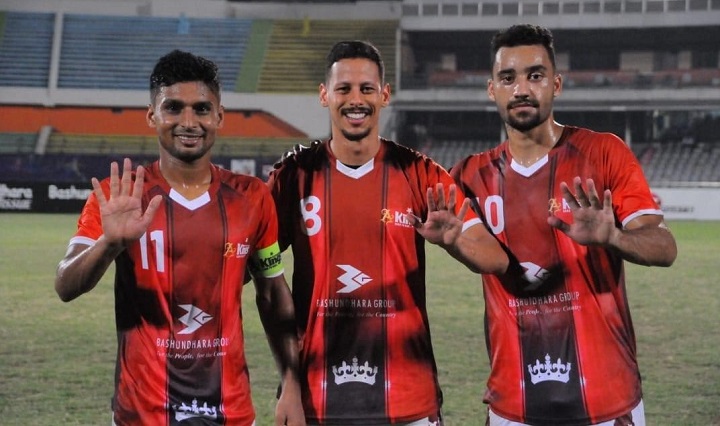 A 5-1 goal win over lowly Brothers Union Limited made the defending champions Bashundhara Kings more confident ahead of their campaign in the upcoming AFC Cup 2021, scheduled to be held on May 14-20 in the Maldives.

The win on Friday night also helped the champions to extend points to 43 from 15 league matches as well as to maintain a 20-match unbeaten run in the ongoing domestic season.

However, the top scorer of the ongoing league Robson Robinho extended his goal numbers to 16 with these two goals.

Brothers Union, who were at the 12th spot in the point table with 5 points, tried to create some pressure on their giant opponents from the beginning of the first half. On the other hand, Kings created chances with their traditional play of possession football.

Kings broke the deadlock in the 21st minute while Brothers defender Ariful Islam failed to clear the ball inside the box. Brazilian midfielder Jonathan Fernandes sized the chance and buried the ball into the net with a right-footer shot (1-0).

Brothers continued their counterattacks and finally managed to net an equalizer in the 36th minute. Uzbek defender Furqatjon scored the goal with the assistance of Gambian striker Mamadou Bah (1-1).

Kings got relieved while Robinho scored the second goal just a few minutes before the half time. The Brazilian forward netted the ball with a right-footer powerful shot, off a cross from Finnish-born Bangladeshi defender Tariq Kazi (2-1).

Sabuz scored his first goal with the help of Sufil in the 60th minute while netted second utilizing a cross from Fernandes in the 74th minute.

Just after six minutes, Robinho sealed the fate of the game scoring his second and team’s fifth goal from a direct free-kick from outside the box in the 80th minute.

Meanwhile, Kings will fly for the Maldives to play AFC Cup 2021 on Sunday.