DW reporters in China: Documenting the erosion of fundamental rights 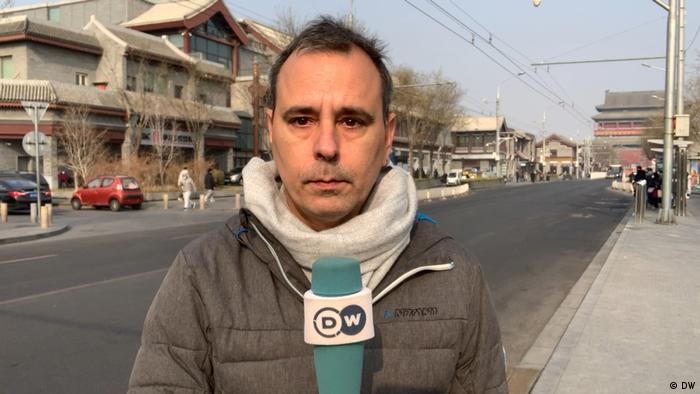 Wang Quanzhang is a lawyer. He spent four and a half years in jail for doing his job. It says a lot about the state of the rule of law in China when even lawyers are persecuted for representing victims.

He is no exception. In a nationwide operation in summer 2015, the Chinese authorities rounded up more than 200 lawyers and dissidents. For three years, Wang's wife Li Wenzu knew nothing about his fate; their son had to grow up without a father. Yet, Li Wenzu's spirit was unbroken. She herself became an activist.

DW's China correspondent Mathias Bölinger accompanied this courageous woman's battle for four years. Their many encounters provided the material for an impressive portrait of The Dissident's Wife, the title of the documentary that is now being honored with the Hong Kong Human Rights Press Award. "An intimate and well-executed profile that strikes at the heart of China's legal system," said the jury about the coverage in the category Documentary Video.

The prestigious prize, now in its 25th year, is awarded by The Foreign Correspondents' Club Hong Kong, Amnesty International and the Hong Kong Journalists Association. The organizers' declared goal is "increasing respect for people's basic rights and focusing attention on threats to those freedoms."

Nearly a decade ago, Xi Jinping became the president of China and chairman of the Communist Party. Since then, tentative steps taken by the previous government toward freedom and the rule of law have been rolled back. Mathias Bölinger has had to face these headwinds of repression in his day-to-day work. The DW reporter tells of deliberate attempts to hamper his work, by "people who stand in my way, follow me, torpedo interview appointments by putting people I want to talk to under pressure." The 44-year-old has also been "grabbed by the arm by complete strangers and dragged into some room, where the police made me delete everything I had recorded," he recounts.

Whenever he met Li Wenzu, the officials of the state security apparatus were never far away but did not interfere with his work. His report, however, documents how state security officials practically besiege Li Wenzu, going so far as to prevent her from attending her husband's trial.

Bölinger speaks fluent Chinese. Without the need for an interpreter, he was able to get very close to Li Wenzu and her family. Bölinger witnessed how the wives of incarcerated lawyers formed a network and developed creative forms of protest for example, collectively shaving their heads. He also traces sensitively how Wang Quanzhang's disappearance and subsequent imprisonment affected his young son.

The correspondent also met with the family after Wang had been released from prison. The 45-year-old lawyer was defiant. He said he intended to appeal his prison sentence and the revocation of his lawyer's license. What pained him most was the estrangement with his son.

The protagonists in a documentary film by DW's Hong Kong correspondent, Phoebe Kong, suffered a different kind of pain: Chi Kin and Chow Pak Kwan were taking part in pro-democracy protests in Hong Kong when they were shot at by the police without warning. One bullet narrowly missed Chi Kin's heart. Chow Pak Kwan's spine and internal organs were damaged. As Phoebe Kong shows, none of the police officers responsible were brought to justice. On the contrary, the two demonstrators must prepare to stand trial and face up to seven years in prison.

Kong is being honored with a Human Rights Video Award in the short video category. In an interview with DW, Phoebe Kong explained that the protagonists of her story lay low after their injuries in the 2019 protests. "I had a rare chance to talk to them in person and let them share their traumas brought by the gunshots in front of the camera for the first time. I also have to thank some well-connected sources who help line up the interviews," she said.

Overall, Kong said it had become increasingly difficult to find interview partners since the so-called Hong Kong security law was implemented in June 2020. "People are concerned about the possible consequences of speaking up, even public figures who used to be vocal."

Kong's video shines light onto how acts of repression have increased as Hong Kong is assimilated into the Chinese political and legal systems. Before Britain transferred control of Hong Kong to China, the two states agreed on a transition phase of fifty years with "one country, two systems." According to the agreement, Hong Kong was to continue enjoying democratic freedoms and follow the British legal system until 2047.

She said she hoped that the Human Rights Press Award will contribute to a growing awareness of the protagonists' plight and their defense of freedom. "Hong Kong's struggle is far from over," she said, "even though the actual street protests have ended."