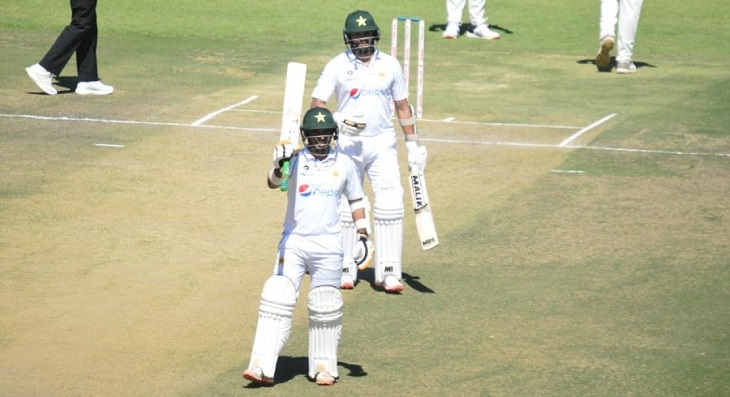 Abid Ali and Azhar Ali shared an unbeaten 154-run partnership as Pakistan took control on the first day of the second Test against Zimbabwe at Harare Sports Club on Friday.

Pakistan were 166 for one at tea after winning the toss, with Abid on 80 not out and Azhar unbeaten on 74.

Zimbabwe started the day well, claiming the wicket of Imran Butt in the eighth over. Butt top-edged a pull to midwicket against left-arm opening bowler Richard Ngarava after scoring two off 20 balls.

But Abid and Azhar settled in on an easy-paced pitch after seeing off some good bowling by Ngarava and Blessing Muzarabani, who restricted Pakistan to just 14 runs in the first 10 overs.

Abid and Azhar gradually increased the scoring rate after the opening bowlers were rested.

Neither batsman looked in trouble against steady but largely unthreatening bowling. They took the total to 72 by lunch and added a further 94 runs in 27 overs between lunch and tea.

Zimbabwe, already hit by injuries to three leading batsmen, had a new injury concern when Roy Kaia was taken off on a stretcher shortly before tea. Fielding at short leg, he was struck a heavy blow above the left knee by a pull shot from Abid.

Pakistan gave a debut to 36-year-old seam bowler Tabish Khan, who replaced all-rounder Faheem Ashraf in the only change from the side that won the first Test by an innings and 116 runs.

Zimbabwe also had a new cap in fast bowler Luke Jongwe, who shone in the recent Twenty20 series against the tourists. He replaced injured opening batsman Prince Masvaure.