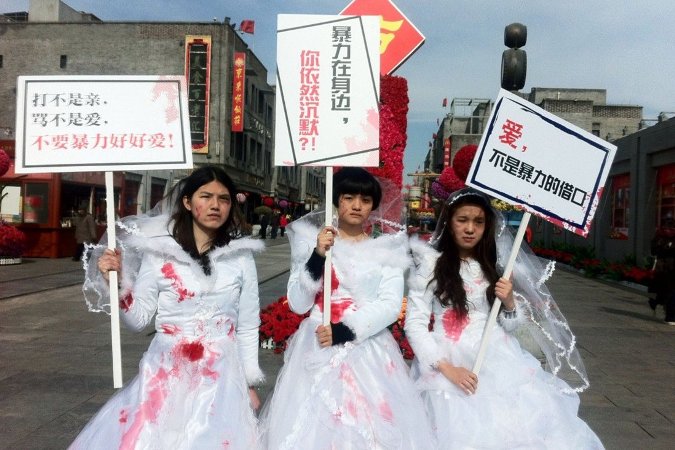 On a chilly Valentine’s Day morning in 2012, a huddle of about 10 young women make their way down Beijing’s northeast Second Ring Road.

Just south of Tiananmen Square, they come to a halt. Three of those fronting the group, their faces painted with red and purple bruises, shrug off their winter coats to reveal wedding gowns splattered with red.

“Love is not an excuse for violence!” the women chant loudly, the wind whipping at their hair.

Within minutes, the police arrive. Law enforcement officials tell the protesters they cannot gather there, but they plead and negotiate: “We will be fast; we are just taking some pictures here.”

The demonstration against domestic violence is finished in half an hour and the women hurry to the nearest railway station, feeling the eyes of the police on thier backs.

Nearly a decade later, Xiong Jing, then a fresh-faced intern helping out at the demonstration held by the now-defunct group Feminist Voices, still remembers the electrifying atmosphere that day. It was only after the event that the organisers realised they could have faced direct confrontation with the police, she said.

“We had no Plan B,” Xiong said. “Only when we returned to the office did we realise that it had been a bit risky. But at that time, we could still bargain with the police.”

The “Blood Brides” demonstration was the first of many Xiong helped organise, and the type of street protest she said would be unthinkable in China today. Just years later, two of the “brides” would be among five women arrested for “provocation and causing a disturbance”, before they could carry out plans to distribute anti-sexual harassment stickers on public transport.

“When I looked back, I realised it was not because we were courageous – we were – but it was also because we had that kind of space,” said Xiong, who moved to Hong Kong in 2019.

Wang Zheng, professor of women’s studies at the University of Michigan, is among scholars and activists who agree the space for feminist discussion has shrunk since the mid-2010s despite progress made in the decades before.

“Right now, Chinese feminism is at a low point since its peak in 1995, and has experienced tremendous regression today with a lot of revived sexist practices,” Wang said.

The feminist movement has a long history in China. The Communist Party had a close relationship with the early women’s liberation movement in China when it took power in 1949. It counted among its ranks socialist feminists such as Cai Chang, the first leader of the All-China Democratic Women’s Federation, the party’s official women’s rights organisation.

Under communist rule, women gained an equal right to divorce their spouses and concubinage was outlawed. In the early 1960s, party chairman Mao Zedong famously proclaimed that “women hold up half the sky”, praising the role of women in the workforce.

In 1995, Beijing hosted the United Nation’s Fourth World Conference on Women – a watershed moment that Wang said ushered in two decades of flourishing growth for feminist non-governmental organisations in China.

But by 2013, there were hints the winds were changing. President Xi Jinping said in a speech that women should shoulder the burden of taking care of the elderly and educating children, and were responsible for upholding family values.

Xi said women’s rights and interests should be protected and that the government should promote gender equality but Wang points to statements Xi made about the role of women at home as indicating a shift in government thinking towards gender equality.

“In Chinese history, this is the first for any Communist Party leader to openly declare such sexist ideas,” she said.

However, Dong Yige, an assistant professor on gender and sexuality studies at the University at Buffalo in New York, said such stereotypes of women existed before Xi took power.

Dong said that during industrial restructuring in the 1990s, many urban female workers were disproportionately laid off with the justification that they could return home to focus on care work.

“What’s new under Xi seems to be a more explicit discursive emphasis on women’s domestic value that had already been circulated before him, but is now joined by official endorsement,” she said.

Since 2013, state media and some local governments have openly campaigned for women in the workforce to “return home”, echoing the party narrative.

One official marriage registry office in Beijing had to take down a poster after a photo of it circulated online, angering many. The poster read: “Being a good housewife and good mother are the biggest achievements for women. Why go through great pains to compete for resources and territory with men?”

It was two years later that five young activists – later popularly known as the “Feminist Five” – who planned to hand out anti-sexual harassment stickers for International Women’s Day on March 8, 2015, were arrested and detained for 37 days.

They included Li Tingting and Wei Tingting, who had worn red-splattered wedding gowns for the 2012 Blood Brides demonstration without apparent repercussion.

“The arrest signalled the government’s move to tighten women’s activism,” Wang said. “That kind of activism is not allowed any more. Before, they could stage performance actions, but now it is impossible.”

Dong said the arrests “came as a shock” for many: “Before then, promoting women’s rights and combating sexual harassment were considered legitimate causes from the state’s view.”

She added that some saw the crackdown as a form of “collateral damage” as authorities tightened their grip over other civic organisations.

Starting on July 9 the same year, hundreds of human rights lawyers and activists were rounded up in a move that critics said was meant to silence the country’s emerging rights defence movement. Since 2016, all foreign NGOs have also had to register with the police.

The tighter rules sent a chill through the movement, Xiong said. “There was an actual risk to carrying out street activism.”

After the arrests, Feminist Voices – then one of the most prominent feminist groups in China – cancelled offline events and channelled their efforts into social media, which has been a large part of its activism efforts since its founding in 2009.

“When the political climate changes, we must adjust our strategies too,” Xiong said. “Social media was a platform that we could have our voice heard, to interest the public and get our issues into the public discussion.”

In the online world, women’s rights activists face a different kind of warfare.

As the feminist movement grows in the aftermath of China’s #MeToo storm starting around 2018, the backlash against those who speak out has included personal insults, harassment and doxxing.

They also risk having their content taken down, often abruptly and without a clear reason.

Dong said it was hard to pinpoint an exact reason for Douban blocking those channels, but that it could have been “self-censorship” to avoid bigger trouble. The channels might have sparked debates that attracted a high amount of traffic, which could be seen as a source of social instability by authorities, added Dong.

Feminist Voices was also silenced online. On International Women’s Day in 2018, its account on microblogging site Weibo was blocked. The social media platform said the account, which had 180,000 followers, would not be reactivated because it had posted “sensitive and illegal information”, founding editor Lu Pin wrote on Twitter.

The next day, the group’s WeChat account, which had 70,000 followers was also shut down and replaced by a notice saying the account had violated the platform’s regulations.

Soon after, Feminist Voices decided to shut down permanently. “We wanted to wait it out but it was not easy. There were difficulties from the outside [the government], and the inside, that is, sustaining the organisation with limited resources and in such risky conditions,” Xiong said.

But others have sprung up in its wake.

Women’s rights initiative Wequality, founded in 2016 by 34-year-old Joy Lin, began pulling together an annual report featuring stories of ordinary women on issues such as gender discrimination and domestic violence in 2018.

The initiative started as a WeChat subscription account and branched to offline events such as group discussions and film screenings.

Lin said it was tough enough to sustain the unfunded project staffed by a handful of volunteers – she is the only full-time staff member, juggling advocacy work with study at the University of Sussex in Britain, where she is pursuing a master’s degree in gender studies.

She added that China’s tight control of its civil society and NGOs – where women’s rights groups risked being accused of either being “illegal social organisations” or having links to foreign entities – was another challenge.

As a survival tactic, Wequality steered clear of politics or sensitive issues in its publications, Lin said.

“Before releasing an article, we are already censoring ourselves,” she said. “Our promotion strategy is also vague, we don’t use direct or provocative language. When promoting a discussion meeting, it would be gentle or mild. But [during the meeting itself], it will be more political.”

Wang said that despite the pressure faced by women’s rights activists, the movement would continue to grow as it was impossible to silence generations of frustrated women.

“The state is pushing down on feminism, but it does not mean that the energy will disappear,” she said. “It is physics. You suppress a lid over boiling water, this pent up anger will find a way out.”

Hundreds of people gathered outside a court in Beijing last December to support Chinese #MeToo pioneer Xianzi in her court case against CCTV presenter Zhu Jun, who she claims forcibly kissed her in 2014.

“That is the hope of Chinese feminism today,” said Wang, referring to the crowds of supporters.

She added that the rising number of highly educated women in China could lead to a generation of women better-positioned to speak up for themselves. About 52 per cent of undergraduates in 2019 were women, compared to 37 per cent before 1999, according to the Ministry of Education.

Many of them are products of China’s former one-child policy, growing up without having to share resources and learning to set high expectations for themselves.

For this group, gender discrimination and pervasive sexist norms are just like “dry firewood”, said Wang. “Now, all you need is a spark for a big fire to spread.”