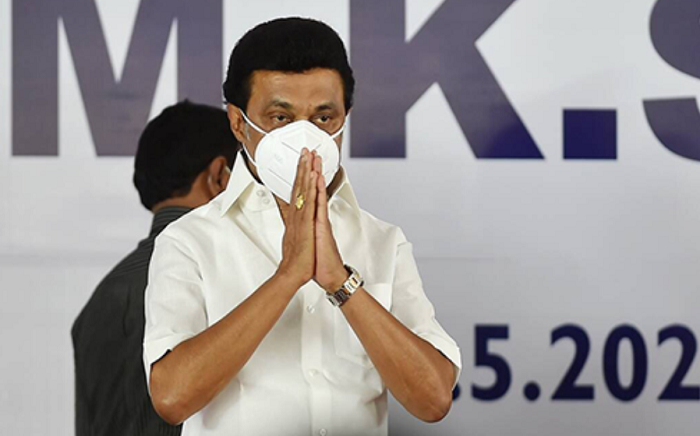 DMK (Drabina Munnetra Kazhagam) chief MK Stalin was sworn in as the new Chief Minister of Tamil Nadu, along with 33 members of his cabinet, by Governor Banwarilal Purohit in a simple ceremony - amid restrictions in place due to the pandemic - at the Raj Bhavan in Chennai this morning.

His wife, Durga Stalin, who had tears of joy in her eyes, and son, Udhayanidhi, who made his poll debut this year and won from Chennai's Chepauk-Thiruvallikeni seat,were among those present.

Stalin was also sworn in as Home Minister and will hold other portfolios, including administrative and police services, special programmes and the welfare of differently abled persons.

This will be Mr Stalin's first term; at 69, he is the oldest first-time Chief Minister of Tamil Nadu. His father, party legend M Karunanidhi, held the post five times. A seven-time MLA and twice elected as the Mayor of Chennai, today's swearing in marks the culmination of a nearly 10-year wait.

Mr Stalin takes charge as the state battles a severe second Covid wave; this morning nearly 25,000 new cases were reported in the previous 24 hours. Cases spiked during campaigning, as all major parties held rallies at which social distancing was absent, leading to sharp rebukes from the Madras High Court.

Containing the virus and leading the state's recovery will be among his biggest challenges.

Ms Kanimozhi expressed confidence in her brother's abilities, and said he had a "clear plan for containment (of the COVID-19 virus) and that will be his first priority.

With 33 ministers in his cabinet, Mr Stalin has a blend of youth and experience to call on to address these challenges. There are 19 former ministers in the cabinet, but only two women.

The new Water Resources Minister is veteran DMK leader Duraimurugan - a former minister and six-time MLA from Katpadi. The post is a critical one for a state that is frequently hit by drought.

The Finance portfolio - another critical post - has been given to Palanivel Thiagarajan, a former investment banker who worked in the United States.

This is a key appointment because during campaigning Mr Stalin had promised ₹ 4,000 in food relief for poor families, free bus travel for women and ten lakh jobs every year.