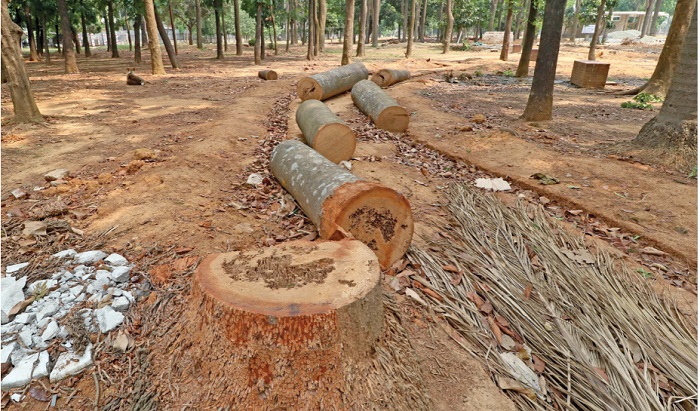 A notice has been served to the government to stop felling trees at the historic Suhrawardy Udyan within 48 hours.

Manzill Murshid, a senior lawyer of the Supreme Court and president of Human Right and Peace for Bangladesh, served the notice on Thursday.

Secretary of the Ministry of Liberation War Affairs Tapan Kanti Ghosh, Chief Engineer of the Public Works Department Mohammad Shamim Akhtar and Chief Architect Mir Manjur Rahman of the Department of Architecture have been made respondents to the notice.

Failure to stop felling trees within the stipulated time will result in contempt of court proceedings against officials responsible for ignoring a previous court order in this regard, Manzill Murshid added.

If the officials concerned do not refrain from cutting trees and constructing restaurants and other establishments in the historic and environment-friendly park, they will face contempt of court charge, said the lawyer.

The lawyer referred to a High Court order passed in this regard in 2009 following a writ petition filed by him.

In the order, a division bench comprising Justice ABM Khairul Haque and Justice Md Mamtaz Uddin Ahmed directed the government officials concerned to preserve the historic places of speech of Pakistan’s first governor general Mohammed Ali Jinnah delivered on March 21, 1948, speech of Bangabandhu Sheikh Mujibur Rahman on February 23, 1969, oath of newly-elected members of the national and provincial councils on January 3, 1971, speech of Bangabandhu on March 7, 1971, surrender of Pakistani forces on December 16, 1971, speech of the then President and Father of the Nation Sheikh Mujibur Rahman on January 10, 1972, and speech of the then Indian Prime Minister Indira Gandhi on March 17, 1972.

The HC asked for detecting the spots of the above historic incidents, constructing pillar and preserving sanctity of the sites.

The apex court also directed the government to form committee to identify the sites and implement its directives.

Bringing any change in the historic sites in the pretext of beautification and felling trees are infringement of the apex court order, Manzil Murshid opined.