Dhaka returns to its old look 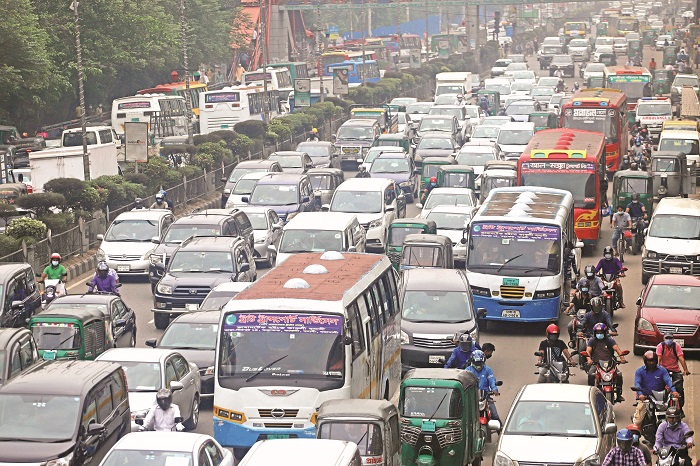 The capital returns to its old look with the resumption of public transport services. In the photo taken from the Airport Road, vehicles are seen stuck in a gridlock. ---Md Nasir Uddin

With the resumption of public transport services on Thursday, the capital city of Dhaka has returned to its old look, witnessing traffic gridlock almost on every street.

After a suspension of 22 days, buses started their operations on roads inside cities and districts from Thursday.

Buses hit the city streets in the morning keeping half of their seats vacant as per the government’s directives to curb the spread of coronavirus.

Long tailbacks were seen in most of the streets in the capital.

Commuters had to wait in terrible traffic congestion for hours, causing untold sufferings to them.

Meanwhile, people were seen ignoring basic precautions, including wearing masks and keeping their distance with others, at offices, roads and vehicles.

People were seen heading towards kitchen markets, banks, shopping centres and even many government and private offices.

Many said they were stranded on the roads for hours due to traffic jam.

Many others said they had to wait in queues at banks and other offices to get services.

The government on Wednesday issued a gazette notification allowing services of public transport, including buses and minibuses, only inside the territory of each district.

However, the inter-district public transport operations, and train and launch services remained suspended.

Like buses, other vehicles like microbuses were also seen plying city roads and carrying passengers, but with 50 per cent of their seating capacity.

Police said they were keeping a strict vigil on all vehicles and taking action against passengers found without masks or flouting social distancing norms.

Traffic Inspector Asaduzzaman said, "Bus services resumed in the city since morning and we’re checking each and every bus to ensure that passengers maintain all Covid safety protocols."

Public transport services were suspended in Bangladesh on April 5, with the government announcing a countrywide lockdown to curb the spread of coronavirus.

However, the government partially resumed the operations of city bus services on April 7 only to suspend the same with the imposition of the countrywide complete lockdown from April 14.