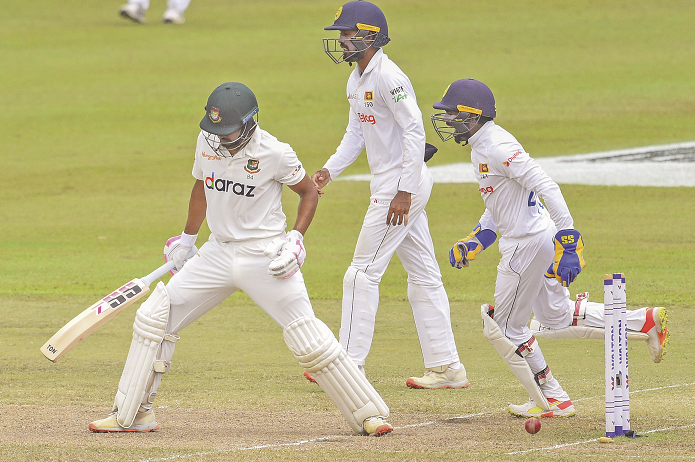 Bangladesh Cricket Board continues to keep first-class cricket at the bottom of their priority list despite the national team’s repeated failures in Test cricket over the years.

BCB recently announced that Dhaka Premier League, the country’s traditional Dhaka-club based cricket tournament will start from May 31 and it will be played in T20 format.

However, the board didn’t announce any time frame for resumption of National Cricket League, the country’s traditional first-class tournament that was halted after two rounds due to the rise of the coronavirus in the country on April 2.

Bangladesh’s recent performance in the just concluded two-match Test series against Sri Lanka which they lost by 0-1 margin was nothing surprising considering they consistently failed in the longer version of cricket.

Bangladesh finished last in the ICC World Test Championship (2019-2021) where they could only draw one match and lose six matches among their seven matches and their only win in Test cricket since last year came against Zimbabwe at home.

It seems Bangladesh's Test cricket has been stuck in a vicious cycle for years as after their every series defeat, fingers are pointed at the same issues - the home wickets, the standard of domestic first-class cricket, technical frailties of the batsmen and everything in between.

This time more issues were added to the list such as mental fatigue and pace bowlers’ inability to bowl for a long spell, etc.

It couldn’t have been exposed more nakedly when Taskin Ahmed gave a shy smile before admitting he didn’t remember correctly when the last time he bowled over 25 overs in local cricket during a press meet in Sri Lanka.

However, it won’t take time to forget the issues and shift their attention to the limited-overs formats, which Bangladesh play more and more importantly earn a considerable amount of success as they are a pretty good ODI team at home and they are looking to catch up with the rest of the world in T20Is.

According to Bangladesh Cricket Board officials they have postponed the last edition of Dhaka Premier League and decided to relaunch it in the T20 format with an eye to prepare for the next ICC World T20, scheduled in India from October.

“Naturally it will help (playing DPL in the shortest format) ahead of the forthcoming ICC T20 World Cup as we feel it will benefit us in preparing our cricketers for the global event,” Kazi Inam Ahmed, chairman of Cricket Committee of Dhaka Metropolis said recently.

DPL was suspended in the third week of March 2020 following the coronavirus outbreak and the bulk of the local players demanded to restart the league as DPL is the main source of income for the majority of players of the domestic circuit.

However, a similar effort was not seen to resume NCL after it was halted though cricketers are less involved in this competition than what they are likely to handle in the DPL.

“We are going to host the remaining part of NCL after the league (DPL) but first we have to see when the league ends,” a member of the tournament committee told The Daily Sun when his attention was drawn regarding the resumption of NCL.

The inability to compete in Test cricket, especially away from home, is a long-standing issue but there's always a limited-overs series to cover up their failures.

Bangladesh's upcoming tour of Zimbabwe is planned in such a way that even if they lose the Test series there are ODIs and T20Is that they can bank upon to restore some pride and then before the next overseas tour, there will be talk about conditions being a challenge.

It is often blamed that batsmen are groomed in slow and low pitches that tend to push them into trouble when they play abroad but though in some venues where NCL is there are grass and something for the pace bowlers but due to lack of competitiveness it hardly pays off in the long run.

Many feel that the board must make domestic first-class tournaments their major priority but BCB’s plan of action proves otherwise.