Professor M. Shahinoor Rahman: The Image of a True Academician and a Skilled Administrator 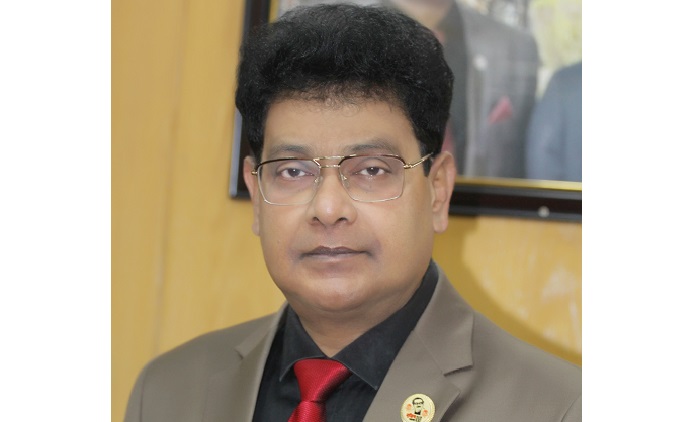 Professor Dr. M. Shahinoor Rahman, enriched with thirty years of teaching experience in the department of English at different public universities and hardened by eight years of administrative experience as the Pro-Vice-Chancellor of Islamic University, Kushtia, has turned out to be a seasoned educationist, distinguished folklorist, meticulous researcher, vibrant writer, and skilled administrator. Born in a culturally rich Kushtia district in 1966, M. Shahinoor Rahman, son of a freedom fighter and civil servant Md. Abdur Rahman and Deloara Rahman Jostna, was brought up in the cities of Khulna and Dhaka. Highly commendable and diligent throughout his student life, Dr. Rahman graduated with Honours from the Department of English at Rajshahi University and did his MA from the same university, securing first class first position. Later, he earned a fully-funded scholarship for higher education at Indiana University, Bloomington, USA. Dr. Rahman completed a Master of Arts Degree with a thesis (equivalent to M.Phil. Degree in Bangladesh) from the Indiana University, Bloomington, USA, under the supervision of Professor Dr. Henry Glassie, Professor Emeritus, and eminent Professor of College of Arts and Science at Indiana University. M. Rahman, a lifelong seeker of Knowledge, accomplished his Doctor of Philosophy Degree (Ph.D.) in 2002 on Rudyard Kipling, one of the most potent and prolific English writers of all time.

Professor Dr. M. Shahinoor Rahman has admirably held the office of the honourable Pro-Vice-Chancellor of Islamic University for two consecutive terms from 20th February 2013 to 23rd February 2021 as a recognition of his diligence as an administrator and his firm commitment to the attributed responsibilities and unconditioned loyalty to the ideals of the Father of the Nation Bangabandhu Sheikh Mujibur Rahman and the visions of Jananetree Sheikh Hasina, the ever most worthy Prime Minister of Bangladesh. Dr. Rahman was quite successful in retaining the government's trust. He proved himself to be the first high official in the history of Islamic University to complete his tenures with immeasurable dignity and enormous popularity. Even amid the insurmountable pressure of administrative responsibilities, Professor Dr. M. Shahinoor Rahman never kept himself away from his students. He never forgot his classroom. He always feels happy and comfortable with his pupils and the classroom.Being genuinely inspired by the urge to dosomething positive for all the bodies of the university, Dr. M. Shahinoor Rahman continuously tried to increase the total capacity of the teachers, the officials, and other employees of the university and thus, to impart quality education to the students ensuring a learning-friendly environment for all.Professor Rahman’s such endevour is, indeed, one of his attempts to actively take part in implementing Deshratna Shiekh Hasina's long-cherished vision of a developed Bangladesh and a secured future for her peoplein time to come. Professor Rahman's outstanding contribution in disseminating education and Knowledge was duly recognized with his being awarded Dr. M. A. Wazed Mia Memorial Gold Medal in 2014.

The reputed academician Dr. Shahinoor Rahman has also published many research articles on different literary issues in peer-reviewed journals at home and abroad. He has also attended various national and international conferences and presented papers. M. Rahman participated in WIPO Conference arranged by the United Nations in Geneva, Switzerland, in 2012. He was the host and patron of the ICSDAP Conference held at Islamic University, Kushtia, Bangladesh, in 2019.

Dr. Rahman is also a talented writer who has already published several books, which include a collection of poetry DhuturaPhool, English Literature: Perspective and Criticism, Bengali Poet Fakir Lalon Shah: Oral Poet and Tradition in the Social Context of Contemporary Bangladesh (Indiana University, USA, 1999), A Collection of Literary Essays. He has also co-authored the book Practicum in Social Work and Social Development: Practice Learning Process. He also jointly translated The Alchemist. On the celebration of the birth centenary of the Father of the Nation Bangabandhu Sheikh Mujibur Rahman, Professor Dr. M. Shahinoor Rahman has also published two collections ofessays: Bangabandhu's Dream and Sheikh Hasina's Success and বঙ্গবন্ধু ও শেখ হাসিনা: বিশ্ব নেতৃত্বের পথিকৃৎ  (Bangabandhu and Sheikh Hasina: The Role Models of World Leadership). He is also the editor of Mujib Year Souvenir Immortal Mujib published by Islamic University, Bangladesh, in 2020.

Dr. Rahman's creative genius covers various areas such as poetry, literary criticism, mysticism, folklore, sociology, translation, and politics. His collection of Essays Bangabandhu's Dream and Sheikh Hasina's Success tends to give an in-depth insight into the ideals of the Father of the Nation Bangabandhu Sheikh Mujibur Rahman and the vision of his competent heir, the most successful Prime Minister of Bangladesh, Janonetree Sheikh Hasina. Essays of this collection glorify the humongous personality of Bangabandhu and his unconditional love towards Bangladesh and its people, and the immense contribution of his daughter Sheikh Hasina to the development of the country. In the other collectione½eÜz I †kL nvwmbv: wek^ †bZ„‡Z¡i cw_K…r(Bangabandhu and Sheikh Hasina: The Role Models of World Leadership), Dr. Rahman has also given his insightful observation about the paramount leadership qualities of both the Father of the Nation Bangabandhu Sheikh Mujibur Rahman and his worthy daughter Janonetree Sheikh Hasina. M. Rahman's writings, no matter whether they are poetry, prose, or criticism, are readers' friendly and permeating as Dr. Rahman possesses a unique quality and a rare mastery in telling facts in a distinctive style and artistic language good enough to draw the attention of readers. M. Rahman is also very choosy and befitting in selecting words and themes which make his writings interesting. His adherence to secularism, devotion to Bengali nationalism, and total loyalty to Bangabandhu's ideologies are reflected in different forms of his literary creations. Dr. Rahman's latest publications about Bangabandhu and the honourable Prime Minister Sheikh Hasina humbly present their mammoth contribution to the lives of the people of Bangladesh to the readers, hopefully making them feel grateful and indebted to these two charismatic personalities from two generations of the same family. Dr. Rahman, an activist of the Bangladesh Chatra League during his university life, popularly known as a cultural activist, has always been inflicted with the burden of presenting Bangabandhu and Jananetree Sheikh Hasina's immense contribution to the nations in his lucid and powerful language. Being seasoned with Knowledgeand life skills, Dr. Rahman tends to present his experience and observation in his writings casually but convincingly. He takes writings as a form of intellectual and moral fighting against the antagonisms to the ideals of Bangabandhu and the liberty of Bangladesh. Professor Rahman has also composed, tuned, and sung songs glorifying the elevated principles and philosophy of the greatest Bengali of all time Bangabandhu Shiekh Mujibur Rahman. The songs are so melodic, so meaningful, and holy that they must touch the hearts of the general people. Dr. Rahman is also an enlisted singer of Bangladesh Radio and Television since 1987. He is, indeed, a crafty music composer.

In addition, as a veteran organizer, Professor Dr. M. Shahinoor Rahman is also involved with many academic and professional organizations. He is a rector of Bangladesh Debating Society, a life member of Bangla Academy, a member of American folklore society, a member of Bangladesh English Language Teachers Association, and a presidium member of Bangiya Society for Literature and Culture. Professor Dr. M. Shahinoor Rhaman successfully worked as a Syndicate Member at Islamic University, Bangladesh, and Jagannath University, Dhaka, and is successfully working as a syndicate member at other universities. He is also a presidium member of Bangabandhu Shikkha O Gabeshana Parishad. He also worked as a vice-president of the Ghatak Dalal Nirmul Committee, Kushtia, and an advisor-member of the Neel Dal (Blue Group) of teachers at Jagannath University. He also plays the role of a Member of the sub-committee for arranging seminars, workshops, and round-table discussions on the Birth Centenary of the Father of the Nation Bangabandhu Sheikh Mujibur Rahman.

The write-up remains incomplete unless we say a few words about Dr. Rahman's spouse Professor Dr.  Salma Sultana. Dr. Salma, an illuminated personality, is a professor of English at Islamic University, Kushtia, and currently serving as the chairman of the department. Dr. Salma Sultana's vigilant presence and whole-hearted support to Professor Rahman have always worked as a significant source of inspiration for his outstanding achievement. Dr. Salma, a member of Bangabandhu Parishad at Islamic University, also has a resolved adherence to the ideals of the Father of the Nation Bangabandhu Sheikh Mujibur Rahman and the ablest Prime Minister of Bangladesh Jononetree Sheikh Hasina. Their only daughter Sumaita Sadia Rahman, a talented student, is pursuing her graduation in Computer Science at the State University of North Carolina, USA.  Their only son Shuhreed Manik Rahman (a singer in the making) is a high school student.

Professor Dr. M. Shahinoor Rahman has, thus, appeared to a multi-talented master of many things. He is revered by his students, adored by his readers and listeners, loved by his compatriots, followed by his fellows, and fondled by his family. He owns a praiseworthy amiability, and he practices a quiet humility, but he is sworn against corruptibility and self-indignation. In all, he is a true academician and a complete sociable man adhering to his ideals and responsibilities.

(Author is a PhD researcher at the University of Victoria, Canada and Assistant Professor of English at Islamic University, Kushtia, Bangladesh)