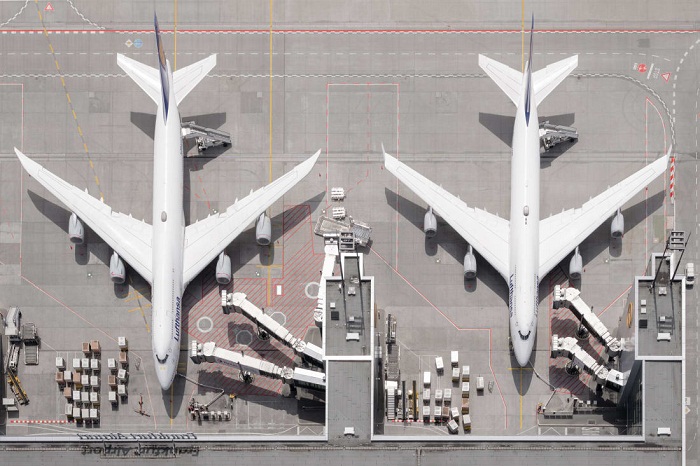 For many travelers, empty runways and lines of grounded planes represent the frustrations of the past year. For aerial photographer Tom Hegen, however, the disruption caused to the world's airports by Covid-19 offered a once-in-a-lifetime opportunity.

"I'd had the idea of photographing airports before, but I'd never even thought about requesting (access), because they are super restricted and highly secure," he said in a phone interview from Munich, Germany, where he lives and works. "Usually, you'd never get a chance to fly a helicopter with an open door over a fully-operational airport. It would be impossible."

With flights canceled across the world, and air traffic reduced to a trickle, Hegen tried his luck. And although gaining permission was "long and complicated," he was eventually granted access to six of Germany's largest airports, spending up to two hours in the skies above each one.

The resulting images, brought together in a new book "Aerial Observations on Airports," reveal an unexpected beauty, with the German photographer finding moments of symmetry and geometry amid the parked planes. Warehouses, parking lots, containers and terminal buildings all play a role in the surreal images, creating a sense of scale and, often, exhibiting patterns of their own.

"Some of the photos look like illustrations," said Hegen, who also works as a graphic designer. "They almost look artificial -- as if the lines were added in post-production."

The world from above

The impeccably composed images belie the physical challenges of shooting from a helicopter at around 2,000 feet above ground. Hegen remained in constant communication with the pilot, who was in turn speaking with air traffic controllers and clearing airspace for the rare flights still in operation.

"Working out of a helicopter is quite challenging, because you're up against the elements," said Hegen, who saw several overseas projects postponed due to the pandemic. "You have wind coming from the main rotor ...(and) it can be so cold that you can't feel your fingers or press the shutter."

This is, however, familiar territory for Hegen. Specializing in aerial images, he often charters hot air balloons and small planes for his work, as well as using customized drones to capture the world from above.

His previous book "Habitat" saw him document the impact of human activity on the natural world, from quarries and industrial facilities, to polluted waterways and salt farms made to look like abstract paintings. And while the photographer is wary of "pointing the finger," his photos encourage viewers to consider the impact of their consumption.

By contrast, his new airport series is more celebratory about the human complexity found at airports. But the images raise confronting questions nonetheless, with Hegen observing that the aviation industry has long profited from the very human interconnectivity that has, inadvertently, aided Covid-19's spread.

"It's kind of ironic that the airlines responsible for globalization are losing the most in this pandemic," he said.