Kings extend winning streak as locals show their might 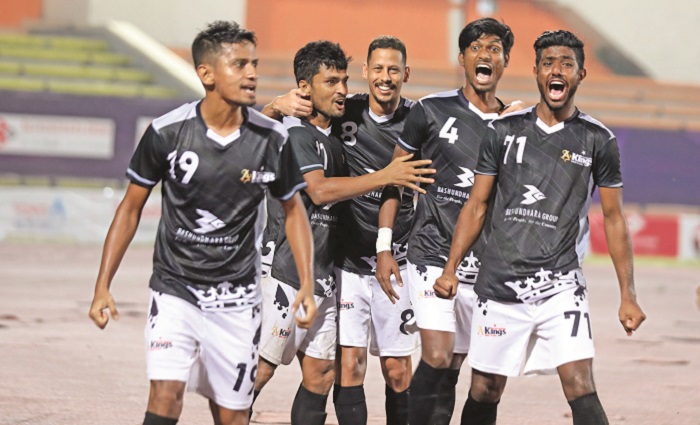 Players of Bashundhara Kings celebrate after scoring a goal against Bangladesh Police Football Club during their Bangladesh Premier League football match at the Bangabandhu National Stadium in the capital on Tuesday.

Defending Champions Bashundhara Kings extended their points to 40 and continued an unbeaten run after earning a 2-0 goals win over Bangladesh Police Football Club in their 14th match at the Bangabandhu National Stadium in the capital on Tuesday.

Kings, which fielded forward Rimon Hossain in the place of injured Latin forward Raul Oscar Becerra in the playing eleven, got a chance to open an account in the 17th minute.

Police FC boosted with confidence after the penalty saving and tried to put pressure on Kings’ defence, though all of their efforts went in vain.

After halftime, Kings started to rule the midfield and finally broke the deadlock in the 58th minute. Sabuz buried the ball with a header from a long cross by Robinho (1-0). Just after four minutes, captain Topu sealed the fate of the game with a header, off a corner from Jonathan Fernandes in the 62nd minute.

With the day’s feat, Kings earned a total of 40 points from 14 matches with 13 wins and one draw in the ongoing league.

Kings also have been unbeaten for 19 matches, including five of the season’s curtain-raiser Federation Cup, in the ongoing domestic season.

Dhaka Abahani Limited outplayed Brothers Union Limited by 5-2 goals in the day’s other goalfest match at the same venue.