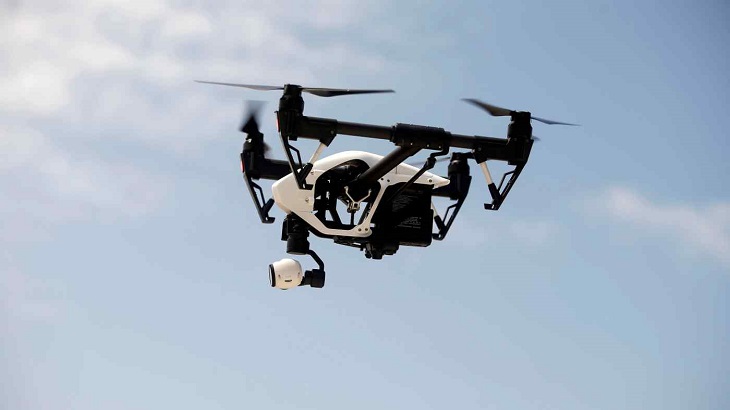 A drone made by China's DJI, which controls more than half of the global market. © Reuters

Leading Japanese infrastructure companies will end their use of Chinese-made drones, joining in the government's efforts to curb the potential security risks.

There have been concerns that drones made by Chinese companies transmit sensitive data to their manufacturers, and the U.S. essentially blacklisted drone maker DJI last year over national security concerns. While Japanese users are also starting to explore alternatives, a lack of cost-effective homegrown options with comparable capabilities could muddle their efforts.

Nippon Telegraph and Telephone subsidiaries currently use drones, some made in China, to inspect telecommunications cables on bridges. These will be swapped out for units made in Japan and elsewhere before they are due to be replaced.

The group has also begun producing its own drones. A new NTT East subsidiary formed in December had sold roughly 150 units as of the end of March and aims to reach 2,000 by fiscal 2023. Though the drones are designed primarily for external clients for purposes like spraying pesticides, some will likely be used by the group to inspect its facilities.

Kyushu Electric Power uses drones made by DJI as well as Japanese and Swiss companies to inspect equipment high off the ground. "We are weighing appropriate responses, including on security risks," the company said, and will consider replacing DJI units with Japanese-built alternatives.

These moves come as Japan urges government agencies to replace drones that pose significant cybersecurity risks under new procurement guidelines that took effect this fiscal year. The Japan Coast Guard has already stopped the use of Chinese-made drones.

The guidelines apply to drones used to inspect infrastructure, in addition to those used for national security purposes. The government is also asking private-sector contractors to step up their security measures.

Headwinds are growing on Chinese-made drones in particular. The U.S. Department of Homeland Security has warned that Chinese-made drones may be sending flight data to their manufacturers without users' consent. The Commerce Department in December added DJI to its Entity List, essentially barring American businesses from exporting technology to the company.

DJI told Nikkei that it has focused heavily on information security and that all customers can control what data is collected, saved and sent to the company.

Japanese drone makers are ramping up development efforts to tap the likely rise in demand for homegrown products. Autonomous Control Systems Laboratory, which is listed on the Tokyo Stock Exchange's startup-focused Mothers market, is developing a drone with Yamaha Motor and other partners to go on sale as early as October. The drone's flight data and any images it takes will be protected.

"Major electricity and gas companies have approached us, saying they want to switch to domestically made drones for inspections and other uses," ACSL President Satoshi Washiya said.

Sony Group unveiled its Airpeak drone in January ahead of the commercial launch. The model is primarily designed for the entertainment industry, but Sony will also consider branching out into logistics, infrastructure and other fields.

But not all Japanese businesses are ready to switch to homegrown drones just yet. Few existing models can satisfy client needs, and the ones that are available can cost dozens of times more than counterparts from DJI, which has succeeded in driving prices down through mass production and using shared parts with appliances and other products.

"Until the gap narrows in terms of capabilities and price, it will be difficult to switch to drones made by another company," a leading general contractor said.