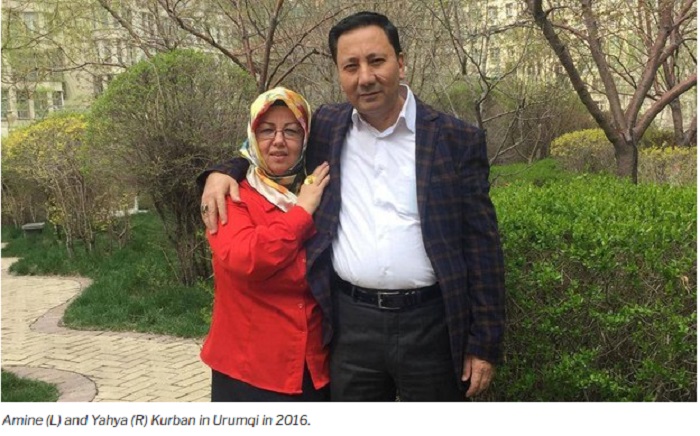 Authorities in northwest China’s Xinjiang Uyghur Autonomous Region (XUAR) have detained an ethnic Uyghur couple of longstanding Turkish citizenship, according to their daughter, who said Beijing will not release them because they have witnessed human rights abuses in the region.

Yahya Kurban, an ethnic Uyghur from Kargilik (in Chinese, Yecheng) county, in the XUAR’s Kashgar (Kashi) prefecture, emigrated to Turkey with his family at age five and later became a Turkish citizen.

On September 10, 2017, he and his wife Amine Kurban, who is also from Kargilik, were detained in the XUAR capital Urumqi, where they ran a shop, and taken to their hometown. Since then, the couple’s four children in Turkey have lost regular contact with their parents.

RFA spoke at length with one of their daughters, Hankiz Kurban, as well as with a representative of the Turkish embassy in Beijing and relevant authorities in Kargilik but was ultimately unable to obtain more detailed information about the couple’s whereabouts and current situation.

“My mom and my dad have been Turkish citizens for 40 years. There are four of us kids. We were all born and raised in Istanbul. My dad went back and forth [between Turkey and Xinjiang] for trade, and he and my mom lived in Urumqi,” Hankiz said.

“[The authorities] took them away to Kargilik [more than] three years ago. As of now they still haven’t let them go. After they were detained, they didn’t call once for two years,” she added.

“My mom sent me a voice message on WeChat crying and saying that she and my father had spent a night in a police station and then gone home to pack bags and were on their way to Kargilik. She said they were taking them away and told us to call the embassy. It was September 11, 2017 … I tried calling them, but their phones had been shut off. I tried messaging back but there was no response.”

Beginning in 2017, authorities launched a campaign of mass incarceration in the XUAR that has since seen an estimated 1.8 million Uyghurs and other Muslim minorities locked up in a vast network of internment camps.

After denying the camps' existence initially, China in 2019 changed tack and began describing the facilities as residential training centers that provide vocational training for Uyghurs, discourage radicalization, and help protect the country from terrorism.

But reporting by RFA and other media outlets indicate that those in the camps are detained against their will and subjected to political indoctrination, routinely face rough treatment at the hands of their overseers and endure poor diets and unhygienic conditions in the often-overcrowded facilities.

Former detainees have also described being subjected to torture, rape, sterilization, and other abuses while in custody.

Parliaments in Canada, The Netherlands, and the U.K., and the U.S. State Department, have described China's actions in the region as "genocide," while the New York-based group Human Rights Watch (HRW) says they constitute crimes against humanity.

Hankiz told RFA that she reported her parents’ detention to Turkish authorities as soon as she received her mother’s message, but representatives from the Turkish government told her that there are many Turkish people in the same situation and that they were “looking into the matter with Chinese authorities.”

“They said if [the Chinese government] had locked them up or if there was a situation in which they were punishing them, they would have to notify [the embassy],” Hankiz said.

“They said they thought [our parents] were fine, and they didn’t say anything else. But every time we called they told us to wait, to be patient. That’s what they said every time.”

RFA called the Turkish embassy in Beijing to ask what they knew about Yahya Kurban and Amine Kurban’s case. The representative who took the call said that the responsible employee was “out of the office” and recommended that RFA inquire about the case via email.

Hankiz said that, much to her surprise, she received a sudden phone call from her father two years after he and her mother had gone missing. Rather than explaining why he had been missing for the past two years, he scolded her, warning her not to become involved in any “untoward” matters—a thinly veiled code by which he likely meant to express that she should go public about her missing parents.

“Two-and-a-half or three months later he called again, along with my mom. My mom’s voice wasn’t normal at all, as though something were squeezing her heart. I know my mom’s voice very well,” she said.

“Once again they didn’t give us any clear answers. They didn’t say they’d been detained. When I asked them things, like if they were having any troubles or where they were staying, they wouldn’t answer. They would just say they’d call again.”

Hankiz said that she felt “it was very clear that there was someone sitting next to them” because they spoke without any emotion and tried to assure her that they were not involved in any kind of trouble.

She said that for the past two years, the children and their parents have been calling each other once every two to three months. The parents refuse to use video chat, however, and each of their conversations lasts only a few minutes.

Hankiz also told RFA that some of their calls were disconnected if conversations did not go “as expected.” She said that she and her siblings have taken these signs to mean that their parents are still in detention.

“There was no emotion at all [in their voices]. It was like they’d just memorized the words. I think it was clear that there were people sitting next to them, or that they had them detained somewhere,” she said.

RFA called an official from the Kargilik County Office of Foreign Affairs, who said that they had no information about the couple. Similarly, a police officer in the county claimed to be unaware of the Turkish citizens’ current situation.

‘Cautious people’ who did not mix with politics

But Hankiz told RFA over the phone from Istanbul that her parents were “very cautious people” who made sure to stay far away from any matters that would have upset the Chinese government and educated their children to do the same. She said there was no possibility her parents had done anything illegal to warrant their disappearance.

“Even now I still remember that when my dad was always so careful when he was in Urumqi, when he was going to and from there,” she said.

“Here [in Turkey], a lot of Uyghurs will go out to protests, but he never allowed us to be involved in that. There’s absolutely no place where my father has committed a crime. Actually, if that had been the case, at the time when they took him away, when they found out about it, he would have come back [to Turkey].”

In several phone calls with relevant officials in Kargilik, RFA was unable to independently verify that the foreign-national couple are being held in the county.

One official source confirmed that Yahya Kurban and Amine Kurban were under his jurisdiction and were not permitted to return to Turkey but declined to comment on their case or provide detailed information, including on their specific whereabouts.

Meanwhile, Hankiz noted that while she still has no information about her parents’ legal and health statuses, the family also has had no news of what happened to their property in Urumqi after their disappearance. She said her parents owned a home, a commercial shop, and valuable items, including several kilograms of gold.

Hankiz said she believes that her parents were detained not because they committed any crime, but rather because they had witnessed “Chinese government crimes” as the internment campaign got underway, and thus could not be sent back to Turkey.

“If at that time, between January and September [of 2017], my father had happened to see something that happened to one of his neighbors, or his friends, or his acquaintances, I think it might be the case that the authorities detained him because they knew that he saw what had happened and it was possible that he would speak out about it were he to leave the country,” she said.

“My parents have committed no crime. They have merely seen the crimes the Chinese government is committing.”