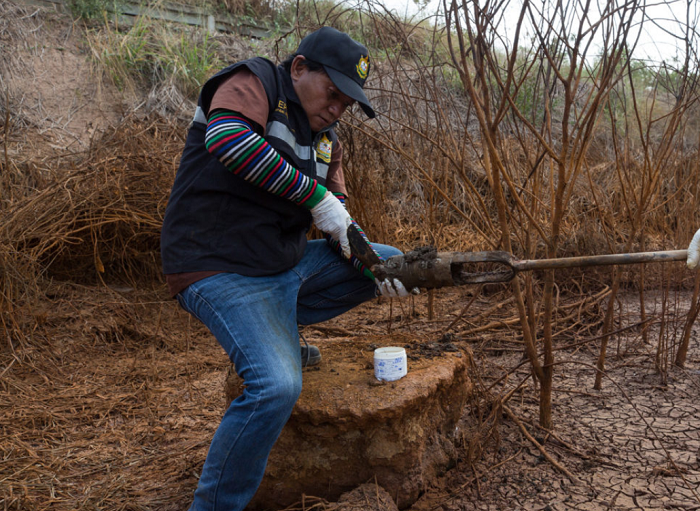 They are burning and smelting electronic stuff again,” says Sarawut Phoomnok, as he walks down a narrow dirt path through a cassava field. The sun is setting, and Sarawut’s eyes are fixed on a billowing smokestack rising above a factory a few hundred metres away. “We are lucky they’re not using the big smokestack this evening. But it will still go on the whole night. We can’t even sleep with the windows open. The smell is that unpleasant.”

Sarawut’s village and the nearby factory are situated in Khao Hin Sorn subdistrict, southeast Thailand. In March, the government issued the Thai–Chinese business CT Steel with a permit to recycle electronic waste here. But villagers say the polluting factory has been operational since 2018, shortly after China banned foreign imports of most recyclable waste.

CT Steel is one of dozens of businesses and individuals in the Phanom Sarakham district of Chachoengsao province with over 60 permits for landfill, waste sorting and recycling operations. More than a quarter of the businesses are owned by Chinese nationals, according to China Dialogue’s research into Department of Industrial Works and DBD Business databases.

Sarawut’s farm is one of many situated within the Eastern Economic Corridor (EEC), a development zone established in 2017 that stretches across three provinces east of Bangkok: Chonburi, Chachoengsao and Rayong. Since then, farmland has increasingly given way to industrial facilities, and communities have been battling the environmental impacts.

Recycled problems
In May 2014, the current prime minister, General Prayuth Chan-ocha, declared a coup in Thailand. The following year, Prayuth gave the military administration – known as the National Council for Peace and Order (NCPO) – absolute power through an interim constitution.

“After the junta passed the orders, we saw an influx of Chinese facilities, especially in the waste business in the three provinces, even before China’s import ban. They mostly build in agricultural areas,” says Dawan Chantarahassadee, senior officer of the foundation Ecological Alert and Recovery Thailand (EARTH).

At the CT Steel factory, there are piles of black ash and metal components behind a three-metre fence.

The Chinese factory owner, wishing to be identified as “Ki”, says the factory has been underutilised since the pandemic struck. “We haven’t done much at all since Covid-19. We haven’t burned anything. We actually are struggling because there are barely any jobs… You need to understand that our business is struggling too.”

When China Dialogue visited the factory in the first week of February smoke was billowing from its smokestack, and smelted and burned electronic components were visible. Local government agencies conducted inspections of the factory last October. The site remains operational.

In the last five years, the problems caused by recycling businesses have increased alarmingly, according to Aweera Pakkamart, director of the Regional Environment Office for the provinces of Chonburi, Rayong, Chanthaburi, Trad, Chachoengsao and Samut Prakarn.

“From mid-December 2020 to January 2021, we inspected around 95 plastic and recycling facilities in our areas. More than 60 to 70% are Chinese companies. We also found that sometimes they just packed up and left when villagers issued complaints.”

The EEC and the Belt and Road
The EEC forms a part of the Thailand 4.0 plan to improve the economic situation of Rayong, Chonburi and Chachoengsao provinces by developing a broad range of industries.

It has also become an important part of China’s Belt and Road Initiative (BRI). In 2019, the Thai government signed a memorandum of understanding with China on investing in EEC projects. Thai economist Somkid Jatusripitak, who oversaw the NCPO’s economic policies at the time, was the architect of the EEC and a proponent of China’s involvement.

Somkid praised the BRI in a 2018 seminar, calling it a “great and farsighted initiative that aims to benefit the public as it aims to connect humankind from every corner of the world. Therefore Thailand, and especially the government, gives full support to the BRI.”

That same year the EEC Committee issued new guidelines that replaced all existing town planning guidelines in the EEC area and pushed for the conversion of agricultural land to industry, including hazardous-waste-disposal plants and power plants.

The group were following up on villagers’ complaints about wastewater and air pollution, but officers from Chachoengsao Industrial Works, who were directly responsible for the factory inspection, did not show up.

Officials from the Department of Pollution Control collected samples of amber-coloured soil from ditches and a pond outside the factory. The department’s results are pending, but there was a strong smell of acid present, which was replaced by sulphur when the wind changed.

The factory is run by THH Molyprocessing Co Ltd and has been operating for over 14 years. It has allegedly been leaking improperly treated wastewater into the nearby public reservoir. Some of the officers who attended the inspections and requested anonymity expressed frustration with the lack of cooperation from the Department of Industrial Works; action from the regulatory authorities can take years.

South of Chachoengsao, in Rayong, Sanit Maneesri stands beneath the shadow of a dying rubber tree in his friend’s orchard. He inspects more amber-coloured soil, which smells of ammonia. “Isn’t the golden soil pretty? This place could become a new tourist attraction!” Sanit jokes.

He has watched the environment in Nongpawa village go from bad to worse. Villagers have been fighting water and soil pollution caused by a Thai recycling factory run by the Win Process Company.

First, Sanit says, it was air pollution, then a stench came over the village, and after that water in his friend’s pond next to the factory fence turned black.

When the area flooded, pollution travelled to the village’s public pond 500 metres away, right next to Sanit’s house, and the villagers could no longer use it to irrigate their crops.

“We’ve lost count of how many times we’ve filed complaints to different government agencies. Every time they’ve come, nothing has really happened. We are so discouraged,” Sanit says. In a meeting with the villagers, Win Process questioned their choice of fertilisers and pesticides, suggesting this may have caused the death of their crops.

In October 2020, Attapol Charoenchansa, director-general of the Pollution Control Department, inspected the Win Process factory compound. He found the water in the area contaminated with heavy metals and showing high levels of acidity.

It would be hard enough to deal with one factory’s pollution, but it is very scary when they plan to have 12 here.

Dr Jakkrit Kunthong, Love Klong Mue Sai Stream
“These massive environmental problems that trouble the villagers have been going on for over 10 years,” Attapol says. “This is because the factory does not have a good conscience and the responsible government officials do not have the civil servant spirit.”

When China Dialogue visited the farmland near the factory in late 2020, it was flooded with still, lifeless water. The villagers raised funds to drain the water and minimise the damage. On a return trip, the soil had again turned amber.

Sanit has some hope that he and his fellow villagers will get compensation. After more than a decade, the Pollution Control Department has set up a committee to oversee the issue and plans to file legal claims against the factory.

Mega projects
There are mega projects afoot too. In October 2018, the Thai cabinet approved five in the EEC, with an estimated total cost of 650 billion baht (US$21 billion). These include a high-speed rail line, an “aviation city”, and two seaports.

Work has already started on both the high-speed line and the Map Ta Phut seaport, with land reclamations and remuneration for villagers. Companies running industrial estates in the EEC, both domestic and foreign, also plan to expand.

During a forum organised by Somnuck Jongmeewasin representatives from 5 provinces discuss the problems their communities face from factory pollution.

Representatives from five Thai provinces discuss the problems their communities face from industrial pollution. The map behind these speakers shows the many different factories in the Eastern Economic Corridor. (Image: Luke Duggleby / China Dialogue)
Developments in the EEC are putting pressure on water supplies. The Office of National Water Resources drafted a water management plan for coping with increasing demand. But Dr Somnuck Jongmeewasin, research director with EEC Watch, disagrees with that plan.

“Nowadays, the areas that the EEC covers need around 2,419 million cubic metres every year for utilities, and that’s barely enough. When the projects grow bigger, where will we find water to use? The government says they will divert water from other sources, but what about people in those areas?”

Lack of consultation
On a Sunday morning in Chonburi’s That Thong village, more than 200 villagers of all ages gathered in a camp for youth scouts to discuss their object of protest – the Ken United Thailand Free Zone Industrial Park.

The 70-acre compound is a Thai–Japanese–Chinese-owned venture into plastic production and recycling. Operations have yet to begin, but villagers are concerned pollution is going to affect their sugarcane and vegetable crops. They face a familiar EEC problem: they were not consulted about the establishment of the industrial park.