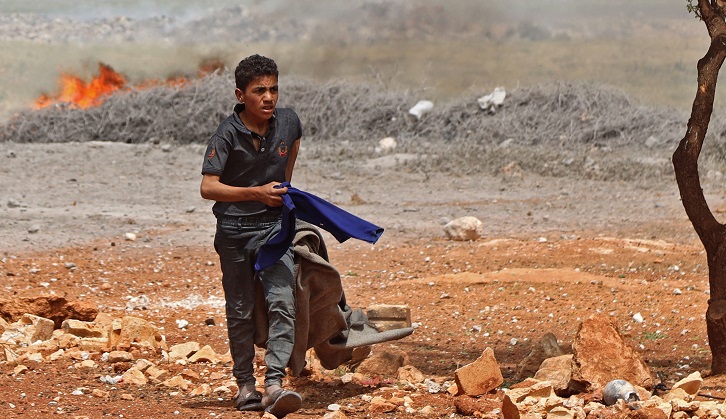 A Syrian boy rushes to bring blankets as a fire burns following a reported explosion in a depot close to a camp. AFP

A blast at a jihadist-run arms depot in Syria's northwestern Idlib region killed two fighters and a civilian Monday, a war monitor said.

The explosion blew the warehouse to smithereens and set fire to a nearby field, an AFP correspondent who reached the scene near the town of Fuaa reported.

The blast destroyed "a warehouse run by jihadists and where missiles and explosive materials were manufactured," the Syrian Observatory for Human Rights said.

The British-based monitoring group said two jihadists were killed in the explosion, as was a woman who lived nearby.

It was not immediately clear what caused the explosion, but the war monitor said it was most likely caused by an air strike.

The Observatory could not immediately specify which organisation ran the warehouse, but said it was not under the control of the Hayat Tahrir al-Sham group dominating Idlib.

The HTS outfit, which includes ex-leaders from the former Al-Qaeda franchise in Syria, has weeded out jihadist rivals from much of the area but small factions remain.

The Syrian government have vowed to retake Idlib, the last region to oppose the rule of President Bashar al-Assad's regime, but a ceasefire brokered by the enemies' respective backers Russia and Turkey has largely held for more than a year.

Syria's war has killed more than 380,000 people and displaced millions since it started in 2011 with the repression of anti-government protests.