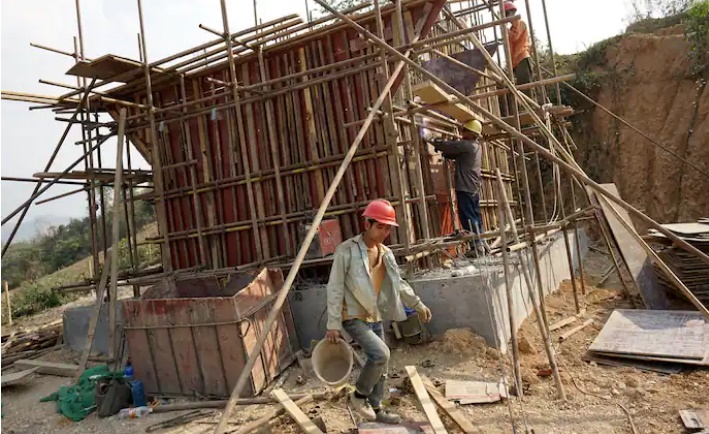 For months, Ding was locked in a 170-square-foot workers’ dormitory near a Chinese smelting facility in Konawe, Indonesia, where he had been assigned to carry out one of his country’s vaunted “Belt and Road” projects.

The 40-year-old native of China’s Henan province, who gave only his surname out of security fears, said a guard kept watch at his door. When the coronavirus ravaged the dorm in November, he developed a 102-degree fever. Still, he could not leave.

Finally, earlier this year, Ding pulled apart the plastic bars on a rear window and climbed out, fleeing on a motorbike driven by a friend. “It was like I went to hell and back,” he said. “I had no other choice but to escape.”

China’s Belt and Road initiative, which aims to connect Asia, Africa, the Middle East and Europe through Chinese-funded ports, bridges, 5G networks and other infrastructure, is built on the backs of people like Ding, who researchers say face exploitation that is exacerbated by the pandemic.

Interviews with labor rights advocates and a dozen Chinese workers employed by state-owned companies and subcontractors reflect a pattern of abuse that threatens to undermine China’s ambitious bid for diplomatic and economic influence, a mission closely tied to the legacy of leader Xi Jinping. Many spoke on the condition of full or partial anonymity, fearing retribution.

New York-based China Labor Watch asserts in a new report that overseas Chinese workers are victims of human trafficking and forced labor. Workers described being held against their will, forced to work while infected with the coronavirus and deceived into working illegally. Their passports were seized, they said, and most had gone months without pay. Some said they were beaten for protesting conditions or forced into “thought training.”

“The entire Belt and Road initiative is based on forced labor,” said Li Qiang, director of China Labor Watch, whose report was drawn from interviews with workers in six countries. “Chinese authorities want the Belt and Road projects for political gain and need to use these workers.”

China’s Commerce Ministry did not respond to questions faxed this past week about the workers’ claims that they were barred from coming home, forced to keep working, subjected to overwork, detained in company facilities and denied their passports.

In response to faxed and emailed questions sent Monday and Wednesday, China’s Foreign Ministry said it could not immediately respond to the allegations of worker abuse and needed more time to verify the information.

The industrial park where Ding was held, a metal-processing complex surrounded by villages, is a key Belt and Road project showcasing the “quality of Chinese-funded enterprises,” according to China’s Commerce Ministry.

The Delong industrial park, built in phases by the Chinese subcontractor Jiangsu Delong Nickel Industry and the state-owned firms China First Heavy Industries Group and Xiamen Xiangyu Group, donated rice and instant noodles to nearby villages during the pandemic, the ministry said in an article on its website in May 2020, hailing the company’s “courage to assume social responsibilities.” Stainless-steel projects at the park were commissioned by a subsidiary of state-owned China Metallurgical Group Corporation (MCC), according to a statement on its website in January.

Like China’s economic boom, these projects rely on men like Ding, from poor rural areas, willing to work for modest wages. More have been going overseas as China’s construction industry has slowed; according to official data, about 1 million Chinese workers were stationed abroad in 2019, a figure researchers say was probably much higher given the number of workers who go abroad through informal channels.

Abuses of workers are not just potentially embarrassing for Xi’s signature foreign policy initiative — they are also possibly a violation of international law. Li said all 11 indicators of forced labor listed by the International Labor Organization, from debt bondage to excessive overtime and abusive conditions, were present in the Chinese workplaces that interviewees described.

Workers who spoke to China Labor Watch reported 12-hour days in hazardous conditions with little protection. One worker was paralyzed after being struck by a hammer. In Indonesia, a worker was crushed to death by a truck. Another said he lost sight in one eye after an injury at work.

Many said their employers did not obtain formal work visas, making the workers illegal migrants. Others described being bought and resold by brokers and subcontractors — transactions over which they had little control.

“The abuses are everywhere,” Li said. “The competitive advantage China is exporting is its low regard for human rights.”

The pandemic has worsened matters. Companies struggling to keep projects on track forced workers to keep toiling by withholding wages, workers said. As prices of limited flights back to China soared, employers refused to pay for promised journeys home. If workers could not pay the extra costs of up to several thousand dollars, they could not return.

When one of Ding’s co-workers in Indonesia contracted the virus last year, he was put in isolation without medical attention, workers at the industrial park said. His colleagues later found him dead. Ding was hired by Jiangsu Delong Nickel and assigned to work at PT Obsidian Stainless Steel (OSS), a joint venture between Jiangsu Delong Nickel and the state-owned Xiamen Xiangyu Group.

At the Delong site — where MCC and Jiangsu Delong Nickel in January celebrated a new phase of the stainless-steel process — workers said they were desperate to leave. One Chinese employee said he was beaten by local security guards and handcuffed after arguing with a manager to be allowed to return to China.

A statement in January on MCC’s website said that no workers had returned to China last year and that the workers “fully recognized the needs of pandemic control” and would continue to “fight on the front line.” MCC, Jiangsu Delong Nickel and OSS did not respond to requests for comment.

Like many lured by the promise of a job contributing to a national cause, Deng Zukun was optimistic before arriving in Algeria.

The 53-year-old from Hubei province had borrowed so he could pay a $1,500 “security deposit” to an employment broker to get a job with a Chinese subcontractor working on Belt and Road projects, including mosques and residential buildings. Before starting in 2018, he had watched news segments on the projects that detailed preferential treatment and good wages.

“When I arrived, it wasn’t like that,” Deng said. His employer took his passport. The pay was less than promised and he was not given a work visa, he said.

Deng wanted to leave but couldn’t afford the penalty of up to $4,650 — half a year’s wages. His contract ended in October, but he has not been able to return home and is running low on money.

“We were cheated . . . and ended up becoming illegal migrants,” he said. “They don’t care whether the workers live or die.”

Overseas Chinese workers are often caught in a complex chain of brokers, subcontractors and employers in China and abroad.

“These workers fall through the cracks of national labor laws. When they are overseas, they are practically in legal limbo,” said Ching Kwan Lee, a sociologist at UCLA.

Chinese regulators have tried to curb exploitation through a system of government-registered agencies. In 2017, the Commerce Ministry began to crack down on unregistered brokers. But abuses persist as brokers and employers flout the rules.

“I think that the Chinese government is embarrassed by examples of its workers being abused overseas,” said Aaron Halegua, a lawyer representing Chinese construction workers in a lawsuit alleging forced labor, filed in U.S. District Court for the Northern Mariana Islands against the Imperial Pacific casino on Saipan and two of its Chinese contractors.

“Significant abuses of overseas workers still persist even after the launch” of the Belt and Road initiative, he said.

Workers like Deng are unlikely to seek legal help because of language barriers and fear of deportation or fines if they are caught working illegally. Many do not have recourse to go after labor brokers — many of them unregistered — who recruit workers with false promises.

For Niu Zepeng, 40, who was building apartments in Souk Ahras province in Algeria, the Belt and Road program has also been a disappointment. Stuck there and owed more than a year’s worth of wages, he said, he has had to borrow money. “We are abandoned here,” Niu said.

The Belt and Road’s political importance adds to pressure that these projects be carried out smoothly. Li, of China Labor Watch, said many of the workers interviewed by the rights group worried they would damage the country’s image and land themselves in trouble. “Many say things like ‘Don’t embarrass China,’ ” he said.

In Indonesia, Ding said he was told by a manager that he could be “disappeared” if he continued to complain. A Chinese citizen journalist writing about issues facing overseas workers said his family was contacted by police who warned that he should stop.

Workers stuck overseas said they are approaching hopelessness. In April, after a Chinese national was found dead in an apparent suicide in Jakarta, Indonesia, almost 100 stranded workers pleaded with the Chinese Embassy for help. “We are truly facing collapse and have no way out,” they wrote.

Ding, who said his passport was taken by his employer when he arrived in 2019, is still stranded in Indonesia. He is determined to find other work. It has been more than a year since he has been able to send money to his wife and two children.

He remembers once when he was unable to buy his daughter a doll, a moment that contributed to his decision to seek work overseas. “As a father, I felt like a failure,” Ding said. “I want to have a better life.”