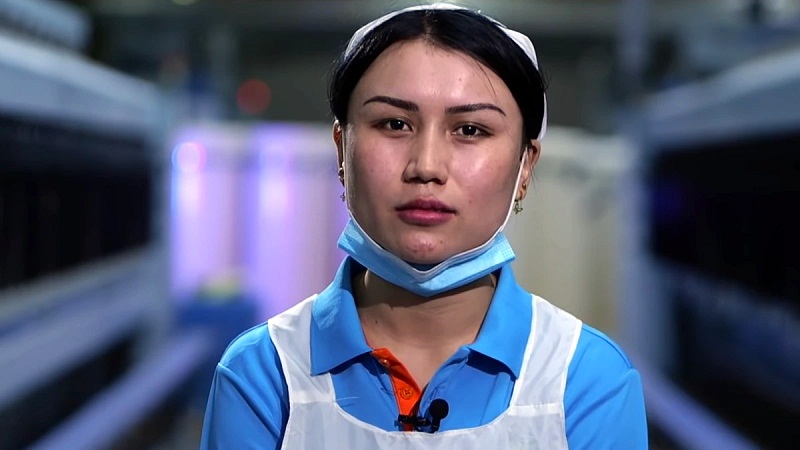 A young Uyghur man says he has turned his dream into reality by opening a popular coffee house at the heart of Kashgar’s historic Old City to “blend the old and the new.”

A young Muslim woman moves from her remote village to the city for a “well-paid” factory job that enables her to provide a comfortable life for her family.

A Uyghur businesswoman challenges stereotypes to help young women in her community to pick Western-style wedding dresses for their big day.

They all purport to be content with prosperous lives, freedom of choice, and abundant opportunities they say they enjoy in their home region of Xinjiang in China's northwest.

That is how a new Chinese documentary, Beyond The Mountains: Life In Xinjiang, depicts the lives of ethnic Uyghur and other Muslim minorities -- mostly ethnic Kazakh and Kyrgyz -- in the region.

The film makes no mention of China's brutal crackdown on Xinjiang’s Muslims that has seen more than 1 million people forced into a notorious network of massive internment camps, often run in prison-like conditions, since 2017.

The documentary was released by the state-owned China Global Television Network in mid-April in several languages -- including English and Russian -- in a bid to push Beijing’s narrative of Xinjiang to global audiences.

It seeks to counter multiple accounts by natives of Xinjiang who say Muslims live in a climate of fear and oppression as authorities target their culture, religion, family life, and traditions.

The documentary emphasizes opportunities the government has allegedly created for young people to pursue their dreams in sports, music, business, and other areas.

Xinjiang activists who spoke to RFE/RL condemned the documentary as blatant Chinese propaganda that is a gruesome distortion of reality.

The documentary depicts a coffee shop in a traditional two-story building with a flat rooftop on the backdrop of Kashgar’s scenic Old City.

Kashgar Corner Coffee & Tea is a startup business owned by young Muslim entrepreneur Mardan Ablimit, who describes himself as a “genuine Kashgar boy” with a big dream.

Ablimit says his idea of a coffee shop was to mix his community’s history and culture with modern elements.

He describes his drinks as a perfect “blend of Western coffee and local herbs.”

The coffeehouse features colorful cushions and carpets along with traditional teahouse-style furniture.

Ablimit calls his coffeehouse a “miniature version of Kashgar” where “the older generation is trying new things” and young people like him “are pursuing their dreams.”

“I don’t see any conflicts or contradictions here,” he says, alluding to the official Chinese line of “peace and harmony” in the region.

People in Kashgar are “discarding the old way of thinking” and embracing change, Ablimit claims.

It’s difficult to verify Ablimit’s story of success in a business that he says pays tribute to his community’s history, culture, and traditions.

In reality, the Chinese government has shut down Xinjiang Muslims’ cultural centers, damaged or razed thousands of mosques and historical Muslim structures, and imprisoned community leaders.

Muslims are barred in many areas from entering mosques until they reach the age of 18.

Thousands have been jailed for performing Islamic prayers, celebrating holidays, or having traditionally large families.

Many Muslim children have been separated from their families and placed in special boarding schools -- a move activists say is aimed at brainwashing the younger generation.

Beijing has also reportedly embedded more than 1 million civil servants from the country's majority Han Chinese population to live with Muslim families in Xinjiang as part of the assimilation effort as well as to monitor their movements and contacts.

'Grateful To My Factory'

A large segment of the Chinese documentary is dedicated to young Muslim women who -- according to the video -- have challenged their conservative community’s stereotypes to embrace modern life.

Zileyhan Eysa is introduced as a farmer from the rural county of Kuqa who gets a job at a factory in Bole in the relatively affluent northern part of Xinjiang.

Eysa makes about $600 a month, enough to support her impoverished family in Kuqa and her own life in the city.

With Eysa’s remittances, her mother, Tursungul Rejep, has paid her medical bills while her father is able to buy a car.

Eysa has “learnt many new things” in the city, the video says. She has no intention of moving back to her village and doesn’t think of getting married anytime soon.

In traditional Uyghur families, marriages are usually arranged by the parents. But Eysa’s family “will accept whomever she chooses to marry,” says Rejep, speaking in her native Uyghur.

Eysa -- like all other young Muslims depicted in the documentary -- speaks Mandarin.

The film shows the family’s spacious house in Kuqa, with Eysa, her parents, and two younger siblings -- all exceptionally well dressed -- happily chatting as they eat watermelon.

Samira Arkin is another Muslim woman who has broken with her community’s traditions and “set an example for many other young people.”

Arkin owns a bridal shop in Kashgar where she helps Muslim brides to choose fashionable white dresses for their wedding.

Arkin recalls how she decided to wear a Western-style gown for her own wedding in 2010 despite misgivings by her relatives.

Modern wedding dresses were frowned upon in her community, she explains.

Arkin says she was unhappy to see how some women “covered their faces” and didn’t even have “the right to go out” on their own.

She says she turned her protest into a business opportunity and opened her shop.

“I wanted to change how [Kashgar] brides dress and how they think about it,” Arkin says. The businesswoman claims she enjoys support from many people who tell her she has “made the right choices.”

China has banned the Islamic veil as a sign of religious extremism.

Some Muslim women have reported being harassed by police for wearing long dresses.

It’s impossible to know if Arkin, Eysa, Rejep, and others in documentary were speaking their minds or were ordered to repeat what authorities told them to say.

People are forced to “follow orders” from the Communist Party, says Qairat Baitolla, an activist from Xinjiang who lives in Kazakhstan.

“If they refuse, they face imprisonment, harassment, and even being shot dead,” Baitolla says.

Radio Free Radio/Radio Liberty is partnering with its sister organization, Radio Free Asia, to highlight the plight of Muslims living in China's western province of Xinjiang.

One ethnic Kazakh man, who currently lives in Altay in Xinjiang’s Ili Kazakh Autonomous Prefecture, has told his relatives abroad that authorities were forcing him to denounce on video former U.S. Secretary of State Mike Pompeo’s condemning comments about Xinjiang.

In January, Pompeo declared that China was committing “ongoing” genocide against Muslims in Xinjiang.

The man from Altay also said that Chinese police demanded he denounce and divorce his wife, Altynai Arasan. Arasan lives in Kazakhstan and attends anti-Beijing protests in front of Chinese diplomatic offices.

According to Arasan, police warned her husband he would be killed if he refused to make the video statement.

But “there are also many people” among the Muslim minorities who “blindly trust the Communist Party,” says Bekzat Maqsutkhan, an activist from Xinjiang.

“Authorities select ignorant, trusting, and low-educated people who have never seen the outside world to participate in such propaganda,” he told RFE/RL.

Maqsutkhan, who now lives in Kazakhstan, says some members of Muslim communities take part in the state propaganda for financial gain or to advance their careers.

But the activists say the majority, including many children, have no choice but to read into the camera the scripted texts that proclaim support for Beijing’s version of events.

China denies all of the reports of widespread rights abuses in Xinjiang and insists that the internment camps are educational and vocational training centers aimed at preventing religious extremism.

But many survivors say many of the detainees at the internment camps are subjected to torture, rape, and forced labor -- mainly working in textile factories and picking cotton. Some women have reported being forced to undergo an abortion and others say they were forcibly sterilized.

The documentary comes as the United States, Britain, Canada, and the European Union imposed sanctions on several Chinese officials over the reported rights abuses in Xinjiang.

On April 22, the British House of Commons approved a parliamentary motion declaring crimes against humanity and genocide are being committed against Uyghurs and other mostly Muslims in Xinjiang.