Sri Lanka stretch lead over 400 as Bangladesh in more trouble 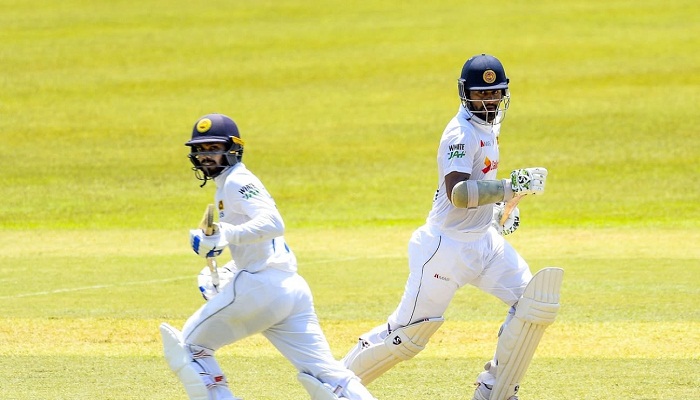 Sri Lanka stretched their lead over 400 with four wickets in hand in the second Test against Bangladesh in Kandy.

At the lunch of day four, Sri Lanka were batting at 172 for six. They are now leading y 414 runs with their huge first-innings lead of 242 runs.

Dimuth Karunaratne led Sri Lanka from the front with hitting yet another fifty in the series. He fell prey as Saif Hassan’s maiden Test wicket after scoring 66 in the second innings which helped Sri Lanka past the 400-run mark as their lead.

Angelo Mathews departed early in the morning but Dhananjaya de Silva added 41 in a quick move.

Earlier, Sri Lanka posted a mammoth total of 493 runs for seven in their first innings riding on the centuries of Dimuth Karunarate (118) and Lahiru Thirimanne (140) and Oshada Fernando scored 81. Niroshan Dickwella, the wicketkeeper-batsman, remained not-out for 77.

Taskin Ahmed was the best bowler for Bangladesh taking four wickets for 127 runs, which is now his best bowling figures in Tests.

In reply to Sri Lanka’s first innings, Bangladesh tumbled for only 251 runs despite a 90 from Tamim Iqbal. Most of the batsmen have had a good start but they failed to come up with the big innings.

Mominul Haque ended up on 49 and Mushfiqur Rahim scored 40. The onus was on them to propel the Tigers to a safe position in this game, but they disappointed.

Sri Lankan debutant Praveen Jayawickrama, who got a chance to play this game due to injuries or off-form of the other spinners, bagged six wickets conceding 92 runs, which is now the best bowling for a Sri Lankan debutant in Tests.