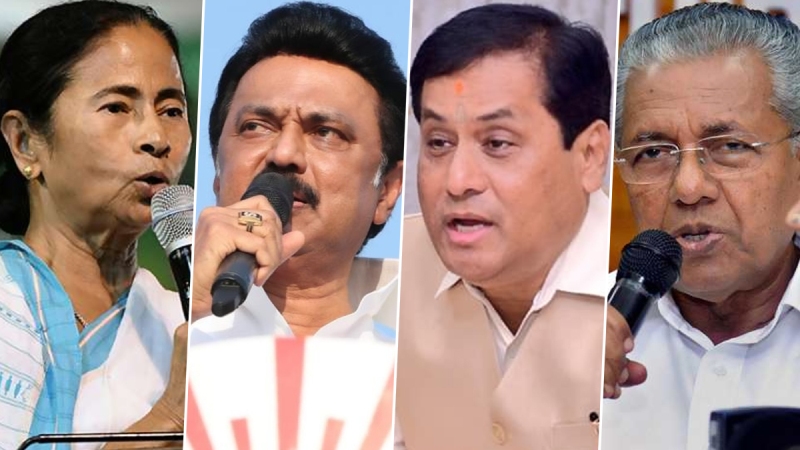 Counting of votes is underway in West Bengal, Assam, Kerala, Tamil Nadu and the union territory (UT) Puducherry and early trends have started pouring in. In West Bengal, Trinamool Congress (TMC) has taken lead while the Bharatiya Janata Party (BJP) trails close behind. According to initial trends, BJP's Suvendhu Adhikari is leading from the hot seat of Nandigram, where he has locked horns with TMC supremo Mamata Banerjee. In Kerala, Pinarayi Vijayan's Left Democratic Front (LDF) and in Assam, BJP have crossed the majority mark, according to early trends.

The counting of votes is being conducted amid tight security in view of the coronavirus disease (Covid-19) and the results are expected to start rolling out after 5pm.

The high-octane election campaign in these states was followed by voting that was spread out over a month. West Bengal voted in eight phases, starting March 27 and ending on April 29, while Assam voted in three. Elections in Tamil Nadu, Kerala and Puducherry were held in a single phase on April 6.

BJP in West Bengal is contesting to wrestle the power out of the hands of three-time chief minister Mamata Banerjee. Assam is seeing a contest between the ruling BJP and a grand alliance of eight opposition parties including Congress, the AIUDF and the Bodoland People’s Front.

The alliance of All India NR Congress and the Bharatiya Janata Party (BJP) is up against the Congress-led alliance in Puducherry.