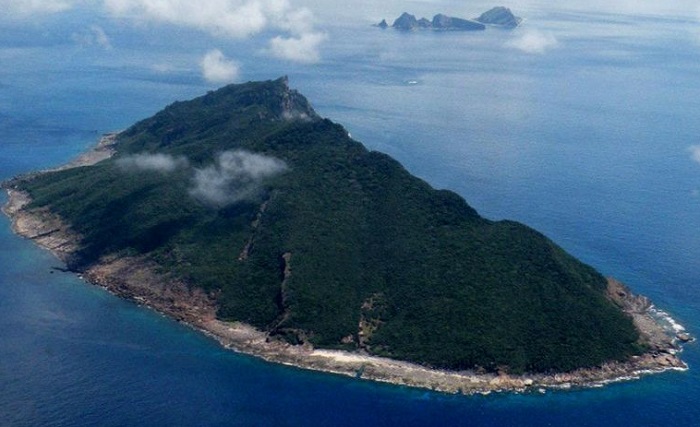 China published a topographical map of the disputed Senkaku/Diaoyu islets, which led Japan to protest the same day. PHOTO: AFP

TOKYO -Asia's biggest economies are again at loggerheads this week, with Japan ramping up its criticism of China's military expansionism and Beijing disfiguring an iconic Japanese woodblock print to mock Tokyo's decision to release treated Fukushima water into the Pacific.

This year's Diplomatic Blue Book, released by Japan's Foreign Ministry on Tuesday (April 27), used its harshest wording yet on China, labelling it a "strong security concern" for the region and the world. Last year's report said China was a "common shared concern".

In an unprecedented move, the 316-page document also raised concerns of human rights violations in the Xinjiang region and criticised actions by Chinese government vessels around the contested Senkaku/Diaoyu islets in the East China Sea as a "breach of international law".

"The Blue Book hypes up the China threat, smears China and interferes in China's domestic affairs," Foreign Ministry spokesman Wang Wenbin said at a regular press briefing in Beijing on Tuesday. He added that "we firmly oppose that and have lodged solemn representation with the Japanese side".

China's publication online of a topographical map of the disputed islets also led Japan to protest the same day.

"The Senkaku islands are unquestionably our nation's unique territory, both historically and under international law," said Japan's Chief Cabinet Secretary Katsunobu Kato. "Even if China surveys and publishes about the Senkaku islands and surrounding areas, this doesn't change."

Tensions have repeatedly flared between the neighbours, whose ties have drastically ebbed over the past year. China is both Japan's largest trading partner and biggest security threat, and Tokyo has repeatedly criticised Beijing's attempts to "create a fait accompli".

At a meeting with United States President Joe Biden earlier this month, Japanese Prime Minister Yoshihide Suga signed off on a leaders' statement that explicitly mentioned Taiwan - which China sees as a renegade breakaway province - for the first time since 1969.

Separately, Beijing had also struck a raw nerve by manipulating one of Japan's most iconic works of art in its protest over Japan's decision to release treated water from the crippled Fukushima Daiichi nuclear power plant into the Pacific Ocean.

The International Atomic Energy Agency (IAEA) has backed the plan, noting that the water will be treated to remove all harmful radioactive contaminants before discharge. The process will, however, not remove the harmless isotope tritium, but such "tritiated water" is a routine by-product released into the sea by nuclear plants worldwide.

The 19th century ukiyo-e woodblock artwork "The Great Wave Off Kanagawa" by Katsushika Hokusai depicts a huge wave against the backdrop of Mount Fuji.

Japanese Foreign Minister Toshimitsu Motegi said on Tuesday that Japan was lodging a "forceful protest" and was seeking the tweet's removal. It remains online as at Wednesday night.

He added to the Diet on Wednesday that the tweet was "disrespectful, tasteless, and should not be allowed".

But Mr Zhao retorted at a regular press briefing in Beijing on Wednesday: "You asked if I will delete the tweet and apologise. You may have noticed, I have pinned the tweet at the top.

"The illustration shows the righteous call of the people. It is the Japanese government which needs to revoke its wrong decision and apologise."

Even as political ties sour between the two Asian neighbours, Japan's economy is so integrated with China that it will be wary of escalating conflict beyond a war of words.

"Japan's business leaders continue to see China as the friendly panda but it has to realise that the panda has fangs," said Dr Tosh Minohara, who chairs the Research Institute for Indo-Pacific Affairs think-tank.

"Many don't want to alienate China, and China knows that. How far can Japan really decouple, even if things get a lot more tense?"