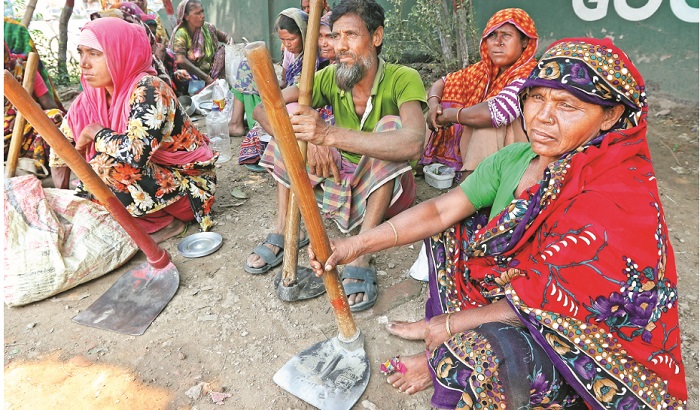 Some day labourers squatting by the roadside look pensive as they are yet get any work amid the ongoing countrywide lockdown. The photo was taken from Ameen Bazar, on the outskirts of the capital, on Friday. ---Reaz Ahmed Sumon

Despite working tirelessly in the factories amid the ongoing corona pandemic, thousands of workers have lost their jobs and as a result, they are passing days in utter miseries.

Against this backdrop, the International Workers Day or May Day will be observed in the country today when workers are losing jobs and being deprived of their rights.

Romesa Khatun joined as worker of Dragon Sweaters Factory in Dhaka in 1997 and worked there until the factory was closed on March 26, 2020 following the outbreak of coronavirus.

When the factory was declared closed, Romesha was told by the management  that the factory will reopen but it didn’t happen.

The jobs of Romesa and her colleagues were not terminated, and therefore, they initially couldn’t claim termination benefits and even they were not given their provident funds.

The enraged workers began staging protests and sit-in programmes at the park lot of Sromo Bhaban as the owners neither reopened the factory nor terminated their jobs.

After nine months of their agitation, at the end of December last year, the factory owners agreed to provide a portion of salary arrears to the workers.

According to labour laws of Bangladesh, employers have a right to stop work and retrench workers in case of an epidemic (or pandemic), but workers must be given service benefits.

As per the labour law, a worker will get 30 days of wages for each of the years he/she was in service in addition to their provident funds.

But Romesa and her colleagues were forced to sign a contract that stated that instead of 30 days’ wages, they will be given 15 days’ wages (for each year) and the money that was deducted from their salary each month for the provident fund.

“We had no alternative but to agree to this contract to have this small amount as we remained jobless for months. Everyone needed money for their survival,” Romesa told the Daily Sun.

This agreement was not meant for all the workers of the closed factory. It is applicable only to 89 workers of the factory who were under the government-set wage board.

Sources at Garment Workers’ Trade Union Centre say the 269 ‘piece-rate’ workers, who are paid on the basis of their production, will get no service benefit, nor would 75 staff members who only get provident funds.

But factory owners didn’t keep their words as per the contract. Though several payment dates already have passed, they are yet to get a singly penny.

This correspondent made repeated attempts to contact with the owners of Dragon Sweaters to know about their stance, but failed to get their response.

As the factory owners did not show respect to the contract  Romesa and 25 other workers of Dragon Sweaters filed cases against them with labour court bringing allegation of wage theft.

Romesa and her coworkers don’t know when they will get their service benefits as they said labour court takes a lot of time to settle a case.

This is not a lone case facing the workers of Dragon Sweaters. The situation is more or less the same for workers of many other factories who have lost their jobs during the pandemic.

According to a study by Bangladesh Institute of Labour Studies (BILS), over 3.24 lakh garment workers have lost their jobs and 1,915 factories, mostly those running on subcontracts, have remained closed since the corona outbreak began in the country in March last year.

AKM Salahuddin, Deputy Inspector General of the Department of Inspection of Factories and Establishments (DIFE), Dhaka, said, “We regularly inspect the factories. If any worker feels that he/she is deprived of their rights, they can inform us of the matter. We will address their issues.”

Many workers who have lost their jobs during the pandemic have complained that they haven’t received positive response from the government bodies concerned.

Some 30,000 workers of 90 factories were sacked directly since the corona outbreak began in the country, according to the BILS study report.

The BILS report said 56 per cent of these workers had to borrow money for buying their daily necessities and 72 percent could not afford their medical expenses.

Taslima Akhter, President of Bangladesh Garment Workers Solidarity, said, “RMG workers have been working amid the corona pandemic but there is no proper step to make workers follow health guidelines in the factories or test their samples. They are working as front liners but not getting any extra benefits for their work like other professionals.”

“The workers who have lost their jobs are going through a severe crisis. But we haven’t seen any special arrangement to assist these hapless workers,” she added.