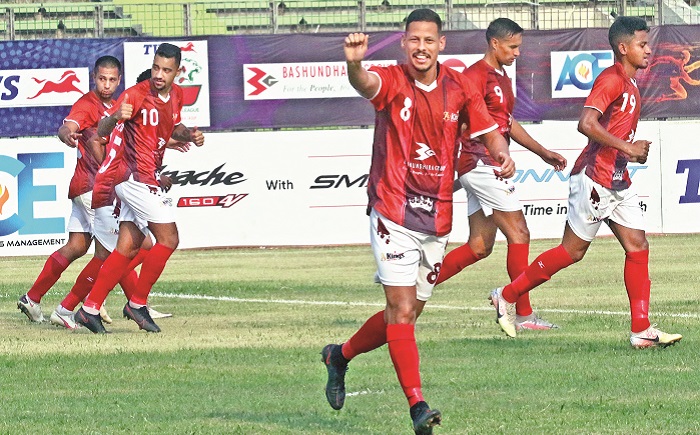 Table-toppers Bashundhara Kings began the second phase of the Bangladesh Premier League in style as the giants crushed Uttar Baridhara Club by 6-0 goals in the first match at the Bangabandhu National Stadium on Friday.

“Today’s match was according to the plan. Our players delivered a consistent performance for the entire ninety minutes. We’re not in AFC mode. Right now, our only focus is on the BPL. No doubt these games will help us to reach the peak of form before mid-May when AFC Cup group stage starts,” Kings’ Spanish coach Oscar Bruzon told The Daily Sun after the match.

The holders bagged the first success in the game in the third minute when Argentine forward Becerra headed the ball in off a long throw-in by Iranian defender Khaled Shafiei.

Brazilian midfielder Fernandes doubled the margin with a right-footer from inside the box utilising a quick-short cross from Becerra in the 11th minute.

Uttar Baridhara came alive after conceding two goals and tried hard to reduce the margin but that attempts went in vain.

Kings maintained their domination with the pressing football and got the third goal in the 33rd minute.

This time, Brazilian forward Robson netted the ball with a left-footer while his compatriot Fernandes assisted him by making Uttar Baridhara goalkeeper Azad Hossen a fool.

After half time, Fernandes netted his second goal with a powerful grounder just outside the box in the 55th minute.

Uttar Baridhara’s misery continued as they conceded their fifth goal after Becerra sent the ball home with a left-footer utilising a pass from Ibrahim in the 64th minute.

Just a few minutes before the final whistle Uttar Baridhara forward Samin Yasir Juel fouled Kings’ substitute defender Sushanto Tripura inside the box in the extra time of the game.

Referee Anisur Rahman Sagor awarded Kings with a penalty and Robson made no mistake to convert the spot-kick correctly.

With the victory, Kings consolidated the top slot with 37 points from 13 matches while Uttar Baridhara remained at the 10th slot with their previous credit of nine points.

Kouakou, who earlier played in Belgian, Thai, Azerbaijan premier leagues as well as French Ligue 1 and 2 from 2009 to 2019, scored in the 41st and 60th minute respectively to help his side earn a point.

Abahani’s midfielder Md Jewel Rana and Nigerian forward Sunday Chizoba scored one each in the 34th and 43rd minute respectively.