Why so many people in China are becoming mermaids 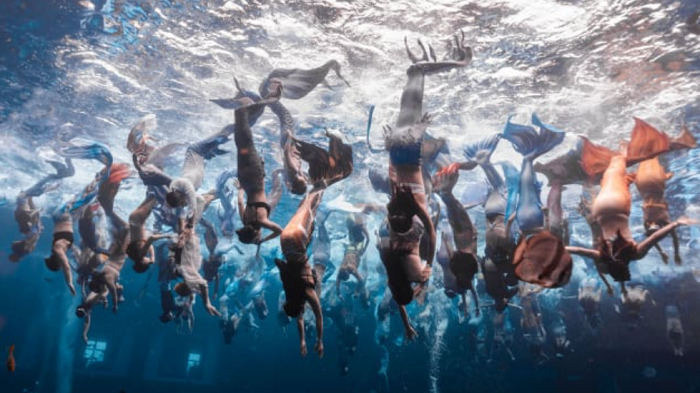 On a normal day, the Ambassador Lagoon inside China's Atlantis Sanya resort on the island of Hainan is home to about 86,000 marine creatures from over 280 animal species.

But on April 28, this huge aquarium welcomed 100 mermaids, all flapping their technicolor tails while gliding through the water in choreographed movements.

The purpose? To break the Guinness World Record for largest underwater mermaid show, part of celebrations to mark the hotel and resort's third anniversary.

Similar to freediving, mermaid divers don't wear a tank or use any external aids except for their mermaid tail. But the two styles have major differences in terms of movement.

To find out more about the sport, we caught up with Dada Li, one of the country's pioneering mermaids and China's ambassador to PADI, the world's largest diving association.

"Freediving beginners usually wear bi-fins, which enable both legs to alternately move, but a mermaid tail ties both legs together so they can't move freely," Li tells CNN Travel.

"Instead, we need to use our belly and waist to move like a dolphin. It requires practice to make this movement smooth and elegant like a real mermaid."

Li's first underwater sea experience took place in the waters of Thailand's Phi Phi Islands, in 2012. From that moment, she was hooked.

"The world below the ocean surface looks completely different from land; I was amazed by the underwater scene, colorful fish and corals, and also the sensation of being in the water," says Li.

That same year, she used her freediving skills to explore another fantasy of hers -- becoming a mermaid.
"I was inspired by an old movie called 'Splash' in the 1980s. The heroine is a mermaid who lives in the sea... That image has lived in my head ever since.

"I couldn't tell you how excited I was when I suddenly had an idea to transform myself to be a mermaid after knowing I could freedive in the ocean."

But first, she needed a mermaid tail.
"I was searching worldwide to get a swimmable tail. There weren't many nice options -- they are mainly decorative costumes for kids and not functional for mermaid diving. Luckily, I did find a very good 'merfin' that was powerful enough to move and swim in. Then I used Lycra fabric to design my first series of mermaid tails," says Li.

Studying videos of mermaid performances from around the world, Li started mimicking their movements and finding her own ways to practice.

In 2015, she founded a professional team of mermaid divers to perform at aquariums and water-related events in China.
"Some audiences in the aquarium couldn't believe the performers are real humans," recalls Li.

"With the help of social media, mermaiding started to go viral."

Mermaid diving takes off in China
In the last few years, mermaid diving has become officially standardized around the world, with schools popping up everywhere from Singapore to the United States. Today, it's one of the hottest trends in China.

"Upon seeing beautiful images from other mermaids, consumers almost immediately jump onto the activity itself. Within four short months after the official launch, mermaid courses now account for 30% of local certificates in China."
Li helps PADI craft their mermaid courses and is one of the instructors.

That said, mermaid diving isn't just for women.
"Initially the Western and the diving worlds were skeptical, it was difficult to predict how mermaids would be received by the public -- nobody ever anticipated the huge potential of this new watersport," says Davids.

"Mermaid swimming is seen as a children's or feminine activity. We can assure you mermaid swimming is a sport for everyone. My husband absolutely loves it."
Compared to freediving or scuba diving courses, mermaid courses focus on fun, safety and lifestyle. It's for anyone who isn't afraid of going into the water and has a love for the ocean.

"Being a freediver, I feel like I am an aquatic human, that I can travel wherever I want in the water," Li says when asked to compare freediving with mermaid diving.

"Mermaid diving is the distillation of freediving to me. It brought (to life) my fantasy, my creativity and my longing towards this mysterious creature."

Corinna Davids, head of development of the mermaid courses offered by SSI (Scuba Schools International), has witnessed a similar trend.
"Mermaid swimming is huge in China," she says. "The sport has grown exponentially since we started in 2017."
SSI -- not affiliated with PADI -- offers mermaid diving training in more than 3,000 locations worldwide.

"We now have more than 1,000 mermaid instructors all over China and the sport is continuously growing larger," Davids tells CNN.
There are now several successful SSI centers in China that concentrate only on mermaid programs.

"Mermaid diving for us has been a successful way to open more people in China to also start scuba diving and freediving," adds Davids.

A relatively new entry in the global diving market, China has recorded rapid growth in the last decade.

It witnessed a 40% increase in Chinese diving certificates -- compared to about a 5% growth rate worldwide -- in 2018.
"Chinese are the youngest divers in the world," says Lou.

"In addition, Chinese women account for the largest percentage of all divers in the world, close to 50%. We have every reason to believe that women would soon surpass 50% as mermaid diving continues to penetrate."