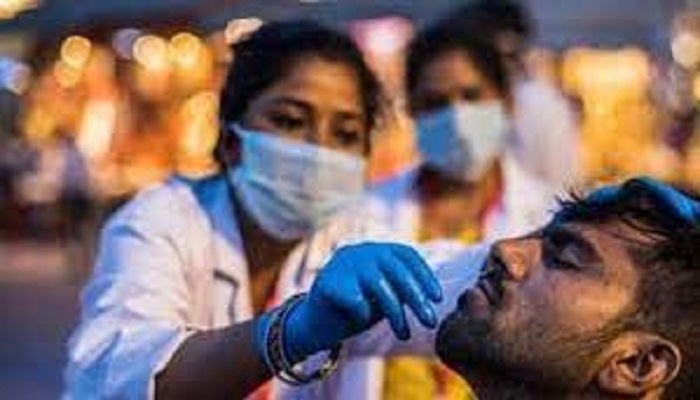 Active caseload, which crossed the three-million-mark on Thursday. also surged by 85,414 and currently stands at 3,170,228 from the 3,084,814 reported previously. This accounts for 16.90 per cent of the total confirmed cases in the country. Meanwhile, as many as 297,540 patients were discharged in the last 24 hours and so far 15,384,418 people have recovered from the disease, the central health ministry’s dashboard showed. With this, the country’s recovery rate stands at 81.99 per cent, the data also showed.

The Indian Council of Medical Research (ICMR) on Friday said that 1,920,107 samples were tested for Covid-19 on April 29. The medical workers in the country have so far tested 286,392,086 samples for the disease, ICMR also noted.

Maharashtra continues to remain the worst affected state in terms of the total confirmed cases and active caseload. According to the latest bulletin from the state health department on Thursday, there are 670,301 active cases of Covid-19 and so far 4,539,553 infections have been detected so far in Maharashtra, the highest by any state in the country. Uttar Pradesh, Kerala and Karnataka too reported more than 35,000 new cases on the previous day.

Many countries have sent equipment and other essential supplies to help India’s efforts against the unabated spread of Covid-19 in the second wave. Earlier in the day, the ministry of external affairs said that a shipment containing 700 oxygen concentrator units and 365 ventilators reached the country from Ireland. Also, another flight from the US with more than USD 100 million worth of supplies is expected to reach India later on Friday. On Thursday, two Russian flights with 22 metric tons of equipment and medicines reached Delhi, the country’s ambassador Nikolay Kudashev said.

The Covid-19 vaccination drive in India has so far administered 152,105,563 doses of the vaccine of which more than two million doses were delivered on Thursday alone, the health ministry said. The program is set to enter its next phase from May 1 and would include all people above 18 years of age for receiving the shot.