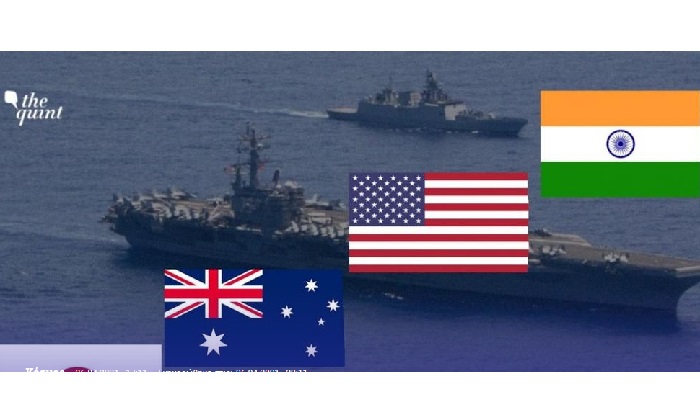 Consolidation of the Quadrilateral Security Dialogue between the USA, Japan, Australia and India, known in short as Quad, seems to have hit China where it hurts most as it has expressed its firm opposition to the alliance. The alliance is not directed against China as such; its aim is quite laudable, protecting freedom of navigation and promoting democratic values in the region.

If Beijing has voiced its opposition against the alliance, it is because China is keen to monopolize the rights of navigation in the South China Sea and and it has made it a habit to trample human rights in China and some adjoining areas. Quad was formed in 2007, mainly at the behest of Japan, but that did not raise much concern in China.

In fact, Quad had become dormant in between because of the exit of Australia from the arrangement. Increasing bullying by China in the South China led to the revival of Quad in 2017 as countries in the Indo – Pacific region felt the need to protect their interests in the high seas, and the U.S., too, had to protect its interests in the region. What set the alarm bells ringing, however, was the first meeting of Quad at the level of the leaders of the nation concerned in March, 2021, with the participation of U. S. president Joe Biden, Japanese prime minister Yoshihide Suga, Australian Prime Minister Scott Morrison and Indian prime minister Narendra Modi.

According to a 2017 report of the Congressional Research Service of the USA, the distrust of Beijing’s role in the Indo – Pacific region has consolidated the Quad. This has been coupled with the expansion of the Malabar Exercise, the regular military drill between the USA and India, to include all the Quad members. Phase 2 of Exercise Malabar 2020, carried out in the northern Arabian sea from November 17 to November 20, 2020, was quite a complex exercise involving navies of the four nations. Nimitz Carrier Strike Group of the U. S. Navy participated in the exercise.

The 24th edition of Malabar showcases the commitment of the four nations “to an open, inclusive Indo-Pacific and a rules-based international order,” says a vision document of the Indian Navy. The threat to an open Indo – Pacific stems from China’s sweeping claims of sovereignty over the South China Sea, a repository of large quantities of untapped oil and natural gas. China’s claim of monopoly over resources of South China sea has antagonized other claimants: Brunei, Indonesia, Malaysia, the Philippines, Taiwan and Vietnam.

China has started occupying islands in the South China Sea, expanding them, and even creating new islands by piling sand on reefs and turning them into military installations, setting up ports and air strips. The U.S. has pointed out that Chinese actions violate the UN Convention of the Law of the Sea. To protect its own long-term strategic and economic interests, it has challenged China’s territorial claims and efforts at land reclamation and carried out Freedom of Navigation Operations. One of the recent flare-ups was in March last when Philippine ordered the deployment of its naval ships to protect its sovereignty in the South China sea where a Chinese flotilla, about 200 strong, thronged a disputed reef and ignored Manila’s demand to leave the area. China called the Whitsun Reef, about 175 nautical miles west of the coast of Philippine, its own. The U.S. has backed Philippine and accused China of intimidating other nations.    China is accustomed to cocking a snook at democratic values; it does not understand the importance that the free world attaches to them.

The plight of the ethnic minorities that live in China like the Tibetans and the Uighurs is too well-known. But China’s high-handed behaviour has now started extending beyond its borders. Myanmar is a glaring example, where people agitating against the military junta are setting on fire factories and shops owned by Chinese people. The reason is the covert support that China has extended to the military clique that has overthrown the democratically elected government of Myanmar.

In Hong Kong, in a latest move to curb further the democratic movement, China has sharply reduced the number of directly elected seats in the legislature of the island territory. The legislature would be expanded to 90 seats, with only 20 to be elected by the people. Currently, 35 seats in the 70-seat legislature are directly elected. Hong Kong, as a former British colony, has a more liberal political system than in mainland China as a treaty obligation. Last year, China imposed on Hong Kong a national security law to crush a pro-democratic movement in 2019.

China has reacted in its usual insolent way, opposing the Quad alliance, despite assurances from India that Quad is not a military alliance. “We hope that the U.S. can view the Chinese military rationally,” a spokesman of the Chinese defence ministry has said recently. “The Chinese military is determined to safeguard China’s sovereignty, security and development interests, and has such capabilities.” Indian Army chief General M. M. Naravane has said, however, that though there would be co-operation among the member nations of Quad, it would not be a military alliance like NATO. Quad, he has explained, is a security dialogue. As a part of that security, there would be military co-operation. Participating countries will still be looking at their own interests. He has also explained that Quad is not directed against any particular country.

It is an alliance of like-minded democratic countries with shared values. The biggest instance that the participating countries in Quad look after their own interests is the recent exercise carried out by the U. S. Seventh Fleet in Indian waters near Lakshadweep without New Delhi’s prior consent to challenge “India’s excessive maritime claims.” It was, according to the USA, a Freedom of Navigation Operation. India has expressed its concern through diplomatic channels. The issue has been settled amicably, however, with the U.S. describing the operation as routine and saying it values “partnership with India on a wide range of issues, including regional security across the Indo – Pacific.” There is, thus, little consolation for China. There are other security alliances to check Chinese hegemony in South East Asia like ASEAN, but what has unnerved China this time is the direct participation of the USA in Quad.