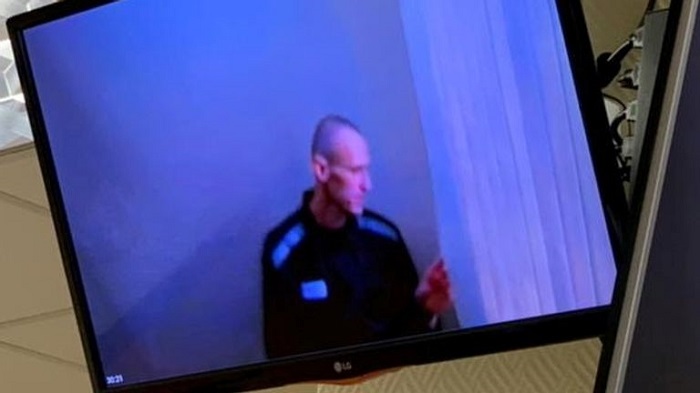 Jailed Kremlin critic Alexey Navalny appeared in court via videolink on Thursday to appeal a defamation conviction, in his first public appearance since he went on hunger strike.

The activist was jailed in February in a separate case for breaking parole conditions. He was in Germany recovering from being poisoned with the Soviet-era military grade nerve agent Novichok when he was accused of breaking his parole. Navalny blames the Kremlin for the attempt on his life, which the government has repeatedly denied.

Navalny went on hunger strike on March 31 while in prison to demand medical care, but ended it last week when he was finally given medical attention.

He spoke with his wife, Yulia Navalnya, who was physically present in court, telling her details about his weight and what he last ate.

He said he was taken to a bathhouse so that he could look "decent" for his hearing.
"I looked at myself. I'm just an awful skeleton. Last time I weighed 72kg I was probably in the 7th grade," he said.

Alexey Navalny is seen on screen via a video link before a court hearing on Thursday.
He added that he ate "four tablespoons of porridge a day, today five, tomorrow I will eat six."

Russia has brought several cases against Navalny, which he and his supporters say are trumped up.
On Thursday, he began an appeals process to have his conviction for defaming a World War II veteran, 94-year-old Ignat Artemenko.

Navalny had made comments on social media last June criticizing a video broadcast by state TV channel RT, in which various prominent figures expressed support for controversial changes to the Russian constitution. Artemenko was among those supporters.

The constitutional changes, which were backed in a July 1 referendum, paved the way for Russian President Vladimir Putin to stay in office until 2036, despite having already ruled the country for two decades.