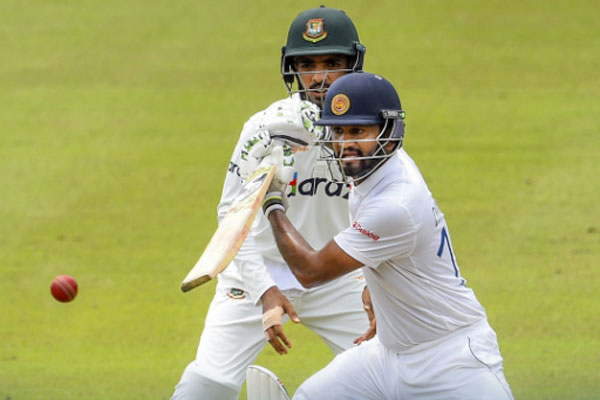 Host Sri Lanka made a cautious start in the second Test against Bangladesh in Kandy on Thursday.

The hosts won the toss and opted to bat first. Bangladesh bowled well in the first session but failed to grab some chances created by the pacers. At the lunch break of day one, Sri Lanka were batting at 66 for none in 27 overs, with each of Dimuth Karunaratne and Lahiru Thirimanne was unbeaten at 32.

Mominul Haque, the Bangladesh captain, used four bowlers in the first 10 overs in a desire to making an early breakthrough but it resulted in nothing.

Off the last ball of the 20th over, Taskin Ahmed made Thirimanny give an edge to the slip fielder, but Najmul Hossain Shanto failed to gram a routine catch. There were more half-chances, but Bangladesh failed to grab them.

Shorfiul Isla, the 19-year-old left-arm pacer, made his Test debut with this game. He bowled well early and got some movements as well.

To pave the way for him, the team management rested Ebadot Hossain in the second game.