Biden celebrates an America ‘on the move again’ 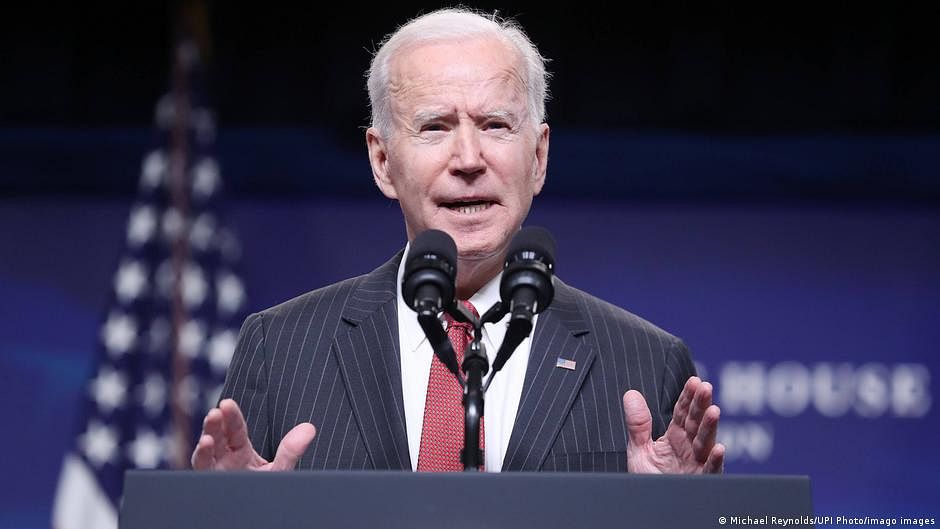 President Joe Biden triumphantly declared Wednesday that the United States is “on the move again” in a rousing speech to Congress, calling for trillions of dollars to rebuild the post-Covid US middle class and give new life to “forgotten” workers.

Lauding the success of mass vaccination against Covid-19, Biden told Congress and the nation on primetime television that “in America, we always get up.”

“America is ready for takeoff,” he said. “We are working again, dreaming again, discovering again, leading the world again.”

Biden, who was celebrating the eve of his 100th day in office, called the vaccine rollout one of “the greatest logistical achievements” in the nation’s history.

But he quickly pivoted to insisting that this national effort must now focus on rebuilding the economy and fighting inequality with “the largest jobs plan since World War II.”

In a line that could have come from his populist Republican predecessor Donald Trump, Biden said working class Americans had been ignored, while the top one percent got richer, and that his plans would give them a chance.

“You feel left behind and forgotten in an economy that’s rapidly changing. Let me speak directly to you,” Biden said, before going on to promise Americans “good-paying jobs that can’t be outsourced.”

In every aspect of the primetime television speech, Biden echoed his almost daily mantra that “America is back” — both in recovering from the coronavirus disaster and in putting the turbulence of the Trump era behind.

When it comes to foreign policy, he underlined Washington’s return to international partnerships damaged under Trump.

“No one nation” can succeed alone, he said, in a rebuke of Trump’s isolationist policies.

Among his many references to arch-rival China, Biden said that while Beijing is seeking supremacy, “we welcome the competition” and “are not looking for conflict.”

On domestic issues, Biden made the case for a lengthy Democratic wish list, including police reform, pro-immigrant reforms and gun control — some of the most sensitive issues in US politics.

He pleaded with Republicans and Democrats to work together on one of the nation’s most hot button topics, saying “let’s end our exhausting war on immigration.”

US presidents usually bend over backwards to avoid or at least hide tax increases.

However, Biden is banking on popular support for his idea of leaning on the super rich to fund his latest new spending proposal, which he unveiled in the speech — the $1.8 trillion American Families Plan.

The plan, which will need approval by a deeply divided Congress, would pour money into early education, childcare and higher education.

To fund this, the top income tax rate would increase from 37 percent, where Trump’s plan put it, back to its pre-Trump 39.6 percent.

The Biden plan would also end loopholes and capital income tax breaks, while raising “billions,” according to the White House, in a tightened tax regime for inherited wealth.

Americans earning less than $400,000 a year, however, would face no extra taxes.

“My fellow Americans, trickle-down economics has never worked. It’s time to grow the economy from the bottom up and middle out,” Biden said. “What I’ve proposed is fair.”

The proposed new splurge comes after Congress already approved a $1.9 trillion American Rescue Plan, which injected stimulus into almost every corner of the economy, and is now debating a proposed $2 trillion-plus infrastructure plan.

The setting for Biden’s maiden address to Congress as president reflected the crisis times in which he took office.

Security has been at top level around the Capitol building since the January 6 riot when Trump supporters rampaged against what the Republican falsely claims was a stolen election.

Although Covid-19 is on the back foot — vaccinated Americans were told Tuesday they can now do most things outside without wearing a mask — the pandemic also loomed heavily.

Instead of a House chamber crammed with the usual 1,600 or so politicians and guests, Biden looked out on a select group of around 200.

Of the nine members of the Supreme Court, only Chief Justice John Roberts attended.

Only the secretaries of defense and state were in the room, meaning that the tradition of nominating a “designated survivor” — someone who could take over the country if the entire government died while inside the Capitol — was not necessary.

Ahead of the speech Senior Republican Senator Mitch McConnell urged the White House to “shake off its daydreams of a sweeping socialist legacy,” accusing the Biden team of acting in synch with “the radical left.”