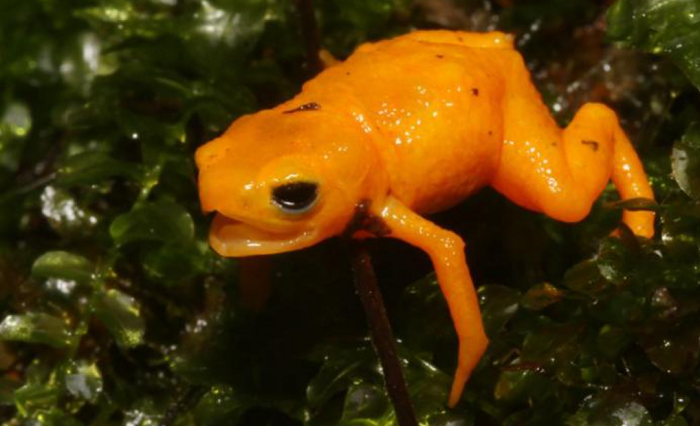 A new species of tiny, neon orange toadlets was discovered in the mountains of Brazil.

This amphibian measures in at just under an inch and is a part of the pumpkin toadlet genus, a collection of tiny, bright-colored toads, according to a study published Wednesday in PLOS ONE.

First believed to belong to an existing species, the toadlet was first found in 2016 in the Mantiqueira mountain range of Brazil, said study author Ivan Nunes, professor in the department of Biological and Environmental Sciences at São Paulo State University in Brazil.

The best moment as a scientist is when you are looking at something and "you are the only person who knows at that moment," he said.

Originally, it was thought that the toadlet was part of the B. ephippium species, but the study revealed there are actually multiple, similar-looking species of pumpkin toadlets, said Sandra Goutte, postdoctoral associate at New York University Abu Dhabi, who has researched toadlets but was not involved in the study.

The newly identified species of toadlets is poisonous, but their threat to humans is minimal, Nunes said.

Humans can touch them with their bare hands, but they should be careful not to touch their eyes or mouth afterward, he added.
The toadlets secrete a poison called tetrodotoxin, which is the same poison found in fugo fish, Goutte said.

"Humans can get poisoned by ingesting the toadlet or if an open wound is in contact with their skin," Goutte said.
In addition to being poisonous, the creature is also fluorescent, Nunes said.

Humans cannot see it with normal light, but when the toadlets are illuminated with UV light, they glow, Goutte said. Researchers have yet to discover why these pumpkin toadlets glow, she added.

It's not known how long their lifespan is or how many are in the wild, but Nunes estimates there are a couple of hundred in the area.

He said he hopes to do further research on these bright orange toadlets to learn why they are fluorescent and to monitor them for conservation purposes.